The Toronto Zoo received more than 7,000 name submissions and votes in the 'Cutest Naming Contest', with the winning names for some of the Zoo's cutest animals rising to the top! Thank you everyone who voted and chose our new names. We look forward to seeing you soon at the Zoo! 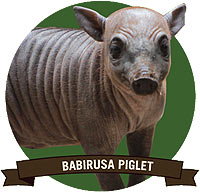 The Zoo's young female babirusa piglet was squishy, tiny and wrinkly when she was born on April 3, 2012, but is becoming more and more adventurous, and curious, as the days go on. She is timid and loves being close to her mother, however her curious nature wins over and she begins to explore. She likes to investigate and familiarize herself with her surroundings and greets zoo keepers by sniffing their boots and pants. Her days are spent running around until she tires herself out, playing hide and seek by burying herself in the hay and eating her favourite meals that include sweet potatoes, pears and apples. 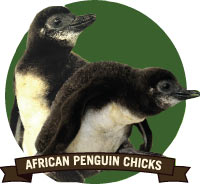 Until names have been chosen, the two male African penguin chicks are temporarily being referred to as the colour of their identification bands that they wear, "Black" and "Blue". Black, born on April 1, 2012 is the youngest African Penguin at the Zoo and is very sweet and shy. He loves playing with bubbles and enjoys splashing around in the outdoor exhibit's pool fountain. Blue, born only two days before Black on March 29, 2012, has a taller and heavier build and is confident and self assured. He displays his confident and his dominant nature by "flirting with danger" and playing with the cormorants - the older penguins in the exhibit. Both chicks have become acquainted with Eldon (the oldest chick born this year) and enjoy the company of their keepers and love jumping into their laps. 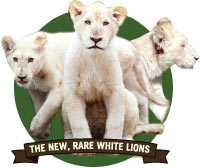 We are very excited to have white lions return to our collection. Lions are the most social of cats but they also enjoy their rest and can sleep up to 20 hours a day! We currently have one male and two female white lions in our collection - all very loveable and friendly. The youngest male is just under a year old and is goofy and affectionate. The youngest of the female lion cubs has a bold personality and is considered the "trouble maker" and instigator of the group while her female companion has an opposite personality being independent, careful, shy and sweet. White lions are not albinos, nor a separate species, but a genetic rarity. They carry the recessive gene known as a colour inhibitor of the Kruger subspecies of lion (Panterha leo krugeri),said to be indigenous to the Timbavati region of South Africa. Unlike any other cats, lions hunt in groups, and the females do all of the hunting. The male lion usually stays and watches it's young while waiting for the female to return.
Posted by Jim Fox at 12:50 PM