(c) By Jim Fox
Cranberry sauce and pumpkin pie are an indispensable part of traditional Thanksgiving dinners and take the spotlight in two upcoming festivals.
The little red acidic berry stars in a three-day festival in Bala on the scenic shores of Lake Muskoka and the Moon River.
And, day-trippers should head for Waterford, south of Brantford, to see more than a thousand decorated pumpkins, including a gigantic jack o’lantern tower, ready for Halloween. 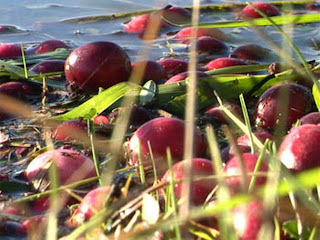 The 27th Bala Cranberry Festival next weekend, from Oct. 14 to 16, is highlighted by tours of marshes to watch the crimson harvest.
Visitors can enjoy cranberry crepes and bread, candied cranberries, cranberry and cran-maple syrup, cranapple cider and even cranberry wine during the activity-packed festival.
There are fireworks, including cranberry-coloured streamers, along with a Cran-Anne competition for the best Anne of Green Gables' look-alike.
Add to that “continuous entertainment,” pancake breakfasts and plenty of meal options, a midway, children’s petting zoo, farmer's market, craft show, bazaar, rubber duck race, games and numerous vendors.
New is a partnership with the Muskoka Steamship Co., operator of the historic RMS Segwun steamship and Wenonah II from nearby Gravenhurst.
Shuttle buses will be running to Johnston’s Cranberry Marsh and Iroquois Cranberry Growers to view the harvest as well as to the steamships, said Kathy Haller, festival publicist.
Native people in North America have been using cranberries for food and medicine for centuries and the area is home to the two berry farms in the province.
Cranberries are a low-growing, perennial vine that flourishes in marshes but they don't grow in water. It’s during harvesting when the bogs are flooded so the berries can be scooped from their vines.
Johnston's was established in 1952 and also has a marsh in Nova Scotia while the Iroquois farm is owned and operated by the Wahta Mohawks since the 1960s.
Both marshes provide rides to view the harvesting and packinghouses and have stores selling their products.
Johnston’s also offers daily wagon tours until Oct. 16 and has the Cranberry Cafe, a mini-farmer’s market and helicopter rides this weekend and next. It also operates Muskoka Lakes Winery featuring cranberry and cranberry blueberry wines along with Georgian Bay Rose.
Festival hours are 9 a.m. to 5 p.m. on Oct. 14 and 15; 9 a.m. to 4 p.m. on Oct. 16. A weekend pass costs $7 while children to age 12 are free. www.balacranberryfestival.on.ca; (705) 762-1564
Pumpkin is king
A shrine to the almighty king of the gourds is being erected in Waterford.
This year, there will be some 1,500 carved and illuminated jack o’lanterns around town and a gigantic tower of them on a downtown shrine reaching into the sky.
Pumpkinfest, from Oct. 14 to 16 and held by the Waterford Lions and Lioness clubs, will have the gourds creatively displayed throughout town at decorated houses and businesses.
There will also be a parade, car show, soap box derby, amusement rides, musical entertainment, marketplace and “sit-down” meals at various churches and halls.
Things start next Friday with a downtown carnival from 6 p.m. to 11 p.m., the “Little Miss and Master Pumpkin” contest at 6:30 p.m. and Old Town Hall entertainment from 7 p.m. to 10 p.m.
The festival parade is Oct. 15 at 12:30 p.m. while “Sciensational SSSnakes,” a display of live snakes, and the Mad Scientist Children's Show, are on Saturday and Sunday.
Other events on Oct. 16 are the 20th annual car show from 9 a.m. to 4 p.m., brunch from 9 a.m. to 1 p.m. at the Waterford Legion, soap box derby for kids at 11 a.m. and tractor shows.
Admission is free (except $3 at the marketplace at Waterford District High School). www.pumpkinfest.com; (519) 443-4944
Happening now
They’ve rolled out the barrel(s) of beer and revellers are singing rousing choruses of Ein Prosit, the Bavarian drinking song, at the Kitchener-Waterloo Oktoberfest. 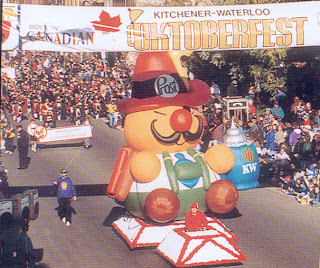 Now through next Saturday (Oct. 15), the spirit of gemutlichkeit (good times) will continue at “fest halls” across Waterloo Region.
A highlight is Monday’s Thanksgiving Day Parade, called the largest of its kind in Canada, with 150,000 spectators and televised nationally.
Fest-goers line a five-kilometre route along King Street from 8:30 a.m. to watch the colourful floats, clowns and marching bands from across Canada and the United States.
-30-
Jim Fox can be reached at onetanktrips@hotmail.com
Posted by Jim Fox at 3:58 PM