Tea times at Fairmont Hotels and Resorts around the world

One-Tank Trip published on Nov. 5/6, 2011
(c) By Jim Fox
It’s a custom steeped in time and tradition.
Afternoon tea, a thoroughly British tradition from the early 1800s and popularized by Queen Victoria, is back in fashion.
The afternoon restorative cup of tea served with small plates of sandwiches and pastries on fine china, of course, are offered at fine hotels, inns, tea rooms and on many cruise ships.
After all, an ancient Chinese proverb says: “Better to be deprived of food for three days than tea for one.”
Toronto-based Fairmont Hotels and Resorts has a long, illustrious history of having some of the best afternoon tea parties.
To celebrate this cherished tradition, Fairmont has declared next Saturday (Nov. 12) an “official” day to celebrate tea at its properties around the world.


And, like most things these days, it’s not your grandmother’s tea any longer.
There’s the Victoria Gin MarTEAnis at the Royal York in Toronto and a Matcha martini shaken, not steeped, for the modern tea enthusiast at the Fairmont Banff Springs.
Pinkies up!
The Library Bar at the Royal York will be steeped in its British legacy during its “RoyalTea” on Nov. 12 from 12:30 p.m. to 3 p.m.
“The tea will include Prince William’s groom’s chocolate biscuit cake and her Majesty’s favourite treats,” said public relations director Melanie Coates.
There will be “an array of Metropolitan Tea Co. teas from the commonwealth,” while non-teetotallers can sip a la carte on Canada’s cocktail royalty, the Victoria Gin MarTEAnis, she said.
“Afternoon tea is not only an alternative to a lunch but also a perfect escape from downtown shopping or a delightful way to start or end an afternoon at the theatre with friends,” Coates said.
Since the hotel opened in 1929, tea has been served from the former rooftop terrace, to the ballroom, Imperial gazebo, EPIC restaurant and now to the “warm and intimate setting” of the Library Bar.
The teas include a selection of premium loose leafs teas – not bagged, for shame – with recent additions of trendy sips of energy, equilibrium, tranquility and digestive teas.
There are also seasonal berry cocktails, finger sandwiches of lobster, smoked salmon, cucumber, Manchego (cheese) and brie; pastries including swans, black cherry clafoutis, chocolate cakes and madelines (cookies); and house-baked cranberry scones with Devonshire clotted cream and preserves.
Go upscale with the Royal Tea Experience that adds smoked salmon and caviar canapes paired with a glass of Moet & Chandon Brut champagne.
Book a tea time on Saturdays and Sundays from 12:30 p.m. to the last reservation at 4 p.m.
The “RoyalTea” costs $40 while the regular teas are $35, $39 for “festive teas” around the holidays and $60 with salmon and caviar. 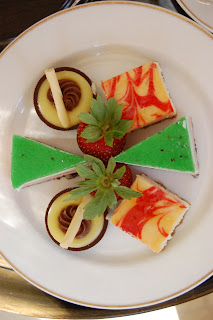 The Royal Winter Warmth Package offers with an overnight, valet parking and tea for two from $239 nightly. www.fairmont.com/royalyork; 1-800-441-1414 or (416) 860-5050 (for tea reservations).
Reading the tea leaves
Now, this was a tea party worth travelling for at the Fairmont Hamilton Princess in Bermuda.
The Heritage Court experience offers 14 varieties of loose-leaf black, green, herbal and fruit teas, including the signature hotel blend.
There’s a delicious assortment of sandwiches served on silver trays, such as Parma (Italian dry-cured) ham and cantaloupe on chive wheat rounds and minted cucumber and chevre (goat cheese) on Bermuda onion rolls. Savoury scones follow, with kumquat jam and traditional Devonshire cream.
After a selection of petits fours, such as pear amandine tart and black forest chocolate cup, the tea finishes with a scoop of sorbet. 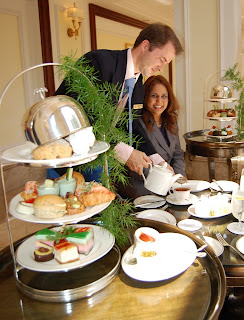 The “little tea drinkers” menu features such kid-friendly options as homemade peanut butter and strawberry preserves on crustless bread, albacore tuna salad on pita triangles and mini ham and cheese sandwiches. Girls also get to wear “fancy party hats and strings of pearls.”
Bottoms up
Elsewhere, Zoe’s Lounge at the Chateau Laurier in Ottawa offers three tea-infused cocktails; there’s apple spice tea latte and apple scones at the Queen Elizabeth in Montreal; and the Fairmont Empress in Victoria has its 1908 tea-based cocktail where 100,000 people take afternoon tea each year.
There’s also a Boston tea party with no uncalled for taxes at the Fairmont Copley Plaza and Battery Wharf hotels.
For a full listing of Get Steeped events, tea fun facts, recipes and more: www.fairmont.com/promo/getsteeped
Around Ontario, there are numerous opportunities to try afternoon tea, including the Millcroft Inn and Spa in Caledon and Langdon Hall Country House Hotel and Spa in Cambridge. There is also a tea guide listing at www.teaguide.net/tearoomsontario.htm
-30-
Jim Fox can be reached at onetanktrips@hotmail.com