Hang on to your hats – Canada’s Wonderland is unleashing Leviathan.
As well, the country’s largest theme park in Vaughan, north of Toronto, will unearth mammoth full-size dinosaurs in an outdoor Jurassic Park of sorts.
The thrills don’t stop there: You can again hang around the top of Toronto’s CN Tower living life on the edge.
Fly like an eagle
Enjoy life in the fast lane on Leviathan, a brute-force roller coaster that’s said to be “one of the biggest and tallest” in the world.
With the park’s opening on May 6, the monster coaster will “dominate the landscape, taking riders to breathtaking heights and speeds never experienced before at Wonderland,” said public relations manager Dineen Beaven.
“The excitement begins on Leviathan’s first lift hill as riders climb to a record-breaking height of 93.3 metres (306 feet) followed by an exhilarating 80-degree drop,” she explains.
“Reaching a top speed of 148 kilometres per hour, riders experience extreme coaster thrills on 1,672 metres (5,486 feet) of track that includes a series of giant camelback hills reaching heights up to 54.9 metres (180 feet).
“Then, there’s an astonishing overbanked hammerhead turn at 115 degrees that crosses above the park’s front gate at 44.8 metres (147 feet) high.” 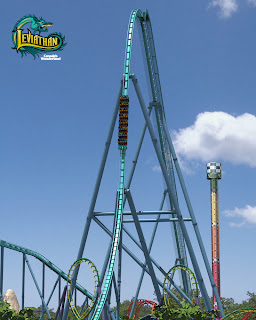 Leviathan is the park’s 16th coaster, making it “one of the top three coaster destinations in the world,” said Norm Pirtovshek, vice-president and general manager.
Leviathan was designed and manufactured by Bolliger & Mabillard, of Switzerland that built Behemoth for Wonderland in 2008.
Take a virtual ride at www.leviathan.canadaswonderland.com and see renderings and specifications.

Dig it
It’s as if a part of Jurassic Park, the fictional movie and book theme park of cloned dinosaurs, was transported to Wonderland.
Dinosaurs Alive! has some 40 life-sized animatronic dinosaurs set in an outdoor Jurassic-themed environment.
There’s a gigantic Ruyangosaurus towering at 12.8 metres (42 feet) tall and a vicious Tyrannosaurus Rex at more than 18.3 metres (60 feet) in length.
The multi-sensory attraction transports visitors back to prehistoric times to show how dinos lived, protected themselves and other aspects of their existence.
Combining “inspiration, science and technology,” visitors encounter handcrafted, life-like creations made to replicate nearly every feature of dinosaurs right down to their skin-like exteriors, Beaven said.
Several dinosaurs have interactive consoles so visitors can guide the movements of their arms, tails, mouths and eyes.
There’s a children’s paleontological dig site to uncover the skeleton of a large predator buried in the sand.
The attraction was created by Dinosaurs Unearthed of Richmond, B.C., a travelling dinosaur exhibition company. http://dinosaursalive.canadaswonderland.com

Life on the edge
EdgeWalk returns to Toronto’s CN Tower with its thrills from May 1 until Oct. 31.
That’s where people take a stroll on a 1.5-metre-wide ledge around the top of the tower’s main pod at 356 metres – or 116 stories above the ground.
“Trained EdgeWalk guides encourage participants to push their personal limits, allowing them to lean back over Toronto with nothing but air and breathtaking views of Lake Ontario beneath them,” said public relations manager Irene Knight.
Oh, yes they are attached to an overhead safety rail via a trolley and harness system.
In its first three-month season last year, there were more than 9,000 walkers from ages 13 to 90, 12 marriage proposals, birthday and anniversary celebrations, corporate team building and client appreciation participants, Knight said.
The experience lasts 90 minutes, including instruction time, with the walk itself being 30 minutes.
The price is lofty, too, at $175 but includes a keepsake video, photos and certificate of achievement. www.edgewalkcntower.ca; (416) 601-3833

Jim Fox can be reached at onetanktrips@hotmail.com