Penetanguishene -- Discovery Harbour’s popular “Haunted Harbour” Hallowe’en event returns for its fifth year the evenings of October 24-25-26 with lots of eerie fun for the entire family. 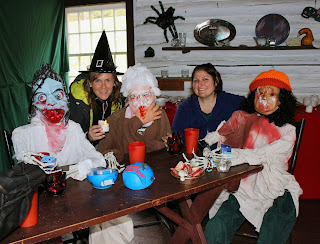 Visitor can walk candlelit paths and look into ghostly displays in the historic buildings.  Pirates, pumpkins, and a spooky graveyard will invade the historic site – beware what’s lurking in the woods as characters can emerge from the night!
“Rockin’ Grandma and Grandpa” plus the Creepy Clown will return with their season’s greetings, and mind the skeletons – they could appear anywhere.  Keep an eye out for “Snappy” the alligator, who’ll make his first appearance at this year’s event.  Also new this year will be Spectacularly Spooky Stories told in the Captain’s house, as well as a fun Hallowe’en “bat” craft that can be made by little folks.

By popular demand, the scarier “Haunted House” will also be offered for those wishing an extra level of fright, daring those to enter through a maze-like walkway full of thrills and chills at each step. (Parental discretion is advised for the “Haunted House” feature).

Discovery Harbour has its own history of ghost stories, some of which have been featured on the “Creepy Canada” television series.  A feature episode on these tales will be shown throughout each evening.

The “Haunted Harbour” Hallowe’en event is at Discovery Harbour, Penetanguishene Thursday October 24th, Friday October 25th, and Saturday October 26th, from 6:00 p.m. to 9:00 p.m.  Admission is $7.00 per person with a non-perishable food item which will be donated to the local food bank.  Children ages 5 and under are free.  For further information call (705) 526-7838 or visit www.hhp.on.ca

Discovery Harbour is operated by Huronia Historical Parks,
and is an Attraction of the Ontario Ministry of Tourism, Culture, and Sport.