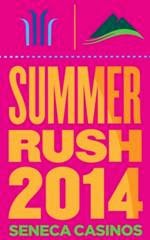 Tickets for July 3 concert in Niagara Falls now on sale

NIAGARA FALLS, N.Y. – A concert this good just can’t wait. In advance of an April 2 announcement for an incredible lineup of 2014 Summer Rush entertainment, Seneca Casinos unveils one of the many blockbuster concerts: rock superstar John Mellencamp performing on Thursday, July 3 at 8 p.m. at Seneca Niagara Events Center in Niagara Falls USA.

Ticket prices start at $95 and are on sale now at Seneca Casino box offices, Ticketmaster.com, all Ticketmaster locations or by phone at 800-745-3000.

Mellencamp, who normally performs in large-scale venues, will have a more intimate setting inside the Events Center. The venue seats 2,400 people and features two jumbo-sized high-definition screens to the left and right of the stage. The furthest seat is just 100 feet away, offering everyone a “best seat in the house” experience.

Mellencamp has solidified his reputation as one of rock’s most dynamic and charismatic stage performers. His resume of 22 Top 40 hits in the U.S. is long and accomplished, spanning from the No. 1 “Jack & Diane” in 1982, to “Lonely Ol’ Night” and “Small Town” in 1985, the sensational remake of Van Morrison’s “Wild Night” in 1994, and the patriotic “Our Country” in 2007. Crowds can also sing along to dozens of other hits, such as “I Need a Lover,” “Hurts So Good,” “Pink Houses,” “R.O.C.K. in the U.S.A.,” and many others.

Throughout his more than 35-year career, Mellencamp has sold more than 40 million albums worldwide, earned 13 Grammy nominations (winning Best Male Rock Performer in 1982 with the song “Hurts So Good”), is one of the founding members of the successful Farm Aid concert series and was inducted into the Rock and Roll Hall of Fame in 2008. Aside from music, Mellencamp also is an actor and accomplished painter.

The performance by John Mellencamp on the eve of Independence Day (U.S.) is just one of many exciting shows coming to Seneca Niagara Casino & Hotel in Niagara Falls and Seneca Allegany Casino & Hotel in Salamanca, N.Y. this summer.

Officials with Seneca Gaming Corporation will announce the lineup for Summer Rush 2014 on Wednesday, April 2 at 11 a.m. at STIR – the new high-energy bar and lounge in the southwest corner at Seneca Niagara Casino & Hotel’s newly renovated main gaming floor. The luxurious setting includes a massive 40- by 20-foot high definition video wall, and officials will unveil each #SummerRush concert on screen. Media and the public are invited and encouraged to attend.