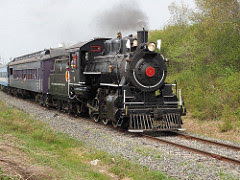 “The Waterloo Central Railway is an iconic feature in a historic village,” says Minto Schneider, Chief Executive Officer of Waterloo Tourism. “Sit back and relax, enjoy the idyllic countryside and allow yourself to be transported back to a more simple time.”


Mr. Bunny will be the featured guest on the Easter train, visiting children at their seats while train travels from the St. Jacobs Market to the Village, and will continue visiting with some passengers as the train continues from the Village north to Elmira. The train will run three return trips between the Market and Elmira.

Please visit waterloocentralrailway.com for schedule, fare information and to buy tickets.
True train enthusiasts can make a full day of it by also visiting the St. Jacobs and Aberfoyle Model Railway, an O scale model with 2,400 feet of track running through an impressive recreation of Southern Ontario in the 1950s.

Keep your eyes peeled for some of the unique and funny features in the model, like the man escaping the hotel without paying his bill, and the clever names on some of the businesses, such as the Johann Sebastien Box Co. The model railway will be open April 2nd, 3rd and 30th, May 1st and then every Saturday and Sunday until December.

About Waterloo Regional Tourism Marketing Corporation
Founded in 2007, Waterloo Regional Tourism Marketing Corporation (WRTMC) is the recognized Destination Marketing Organization for the Region of Waterloo. They are a non-profit marketing and image development organization with extensive knowledge on the development of destination profiling, awareness building programs and strategic partnerships. WRTMC has partnered with hundreds of members within the Region to further their marketing efforts reach by promoting the region to high-potential markets.