The Rizdales: Blue Ain’t The Word – A Tribute to the Music of Legendary Ray Price - Stratford’s Revival House April 21

Plus Bevy of Talented Special Guests 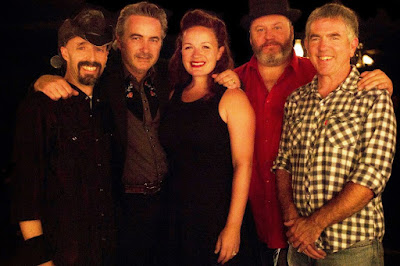 Stratford, ON – On the heels of the sold-out Amelia Curran concert comes The Rizdales with their signature show Blue Ain’t The Word - A Tribute to the Music of Ray Price at Stratford’s Revival House at 8:00 pm on April 21, 2016. Opening artist: the talented lead singer and former Ronnie Hawkins bandmate B.W. Pawley with Plum Loco. The concert is part of the String Bone Presents! Live at Revival House concert series.

The Rizdales, who hail from London, ON, showcases the talents of Tara Dunphy (fiddle, vocals), Tom Dunphy (guitar, vocals), Rob Clarke (bass), Mark Duff (drums) and Blair Heddle (electric guitar). A hardworking honky-tonk country band, the Rizdales regularly perform in Toronto, Austin, Texas and other locales throughout the southern United States. Tara Dunphy, who has a smooth as silk, authentic country voice, has been nominated twice for an Ameripolitan Award (Austin, TX) for Honky-tonk Female Vocalist of the Year.

In 2014 the band released an exceptional recording entitled Blue Ain’t The Word, featuring 14 songs made famous by the legendary Ray Price and given a top-notch rendition by The Rizdales. The CD transitioned into a popular tribute show that has toured throughout Ontario, the southern United States and now Stratford’s Revival House. The production with its classic 60s sound is spot-on.

The remaining concerts in the series feature:

Tickets for the Live at Revival House concert series, which are $25.00 in advance, are available at www.stringbonepresents.com. The concerts are held Thursday evenings from 8:00 – 10:30 pm at Revival House, located at 70 Brunswick Street in Stratford.

Revival House, formerly the Church Restaurant, is one of Stratford’s most iconic buildings. A former Baptist church-turned-fine dining restaurant, Revival House is co-owned and operated by Stratford natives Rob and Candice Wigan. The 1,676-square-metre property was gutted last spring and its majestic interior transformed into a “smart casual” restaurant and lounge. Renowned London chef Byron Hallett runs the expansive kitchen and embrace the local farm to table concept.