Stratford, ON (June 28, 2016) – Stratford’s Revival House is throwing out the welcome mat on July 7, 2016 for Three Women and The Truth, featuring award-winning, Nashville singer-songwriters Mary Gauthier, Gretchen Peters and Eliza Gilkyson. Together, they add up to one trio of terrific talents. The concert starts at 8:30 pm.

The audience can look forward to three women, three guitars, and the words, music and hard-won wisdom from three remarkable musicians at the top of their game. 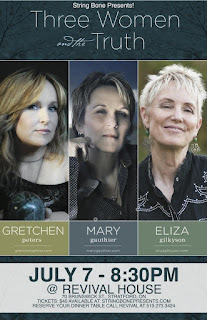 Eliza Gilkyson is a two-time Grammy nominated singer-songwriter and activist who is one of the most respected musicians in Folk, Roots and Americana circles. Her songs have been covered by Joan Baez, Bob Geldof, Tom Rush and Rosanne Cash and have appeared in films, PBS specials and on prime-time TV. A member of the Austin Music Hall of Fame, she has won countless Folk Alliance and Austin Music awards, including 2014 Songwriter of the Year. In 2014 she also received a Grammy nomination for her Red House Records release, The Nocturne Diaries. On stage, Eliza presents a vibrant mix of laugh-til-you-cry storytelling, political diatribe, and love songs ranging from the global to the most intimate.

Mary Gauthier is a singer-songwriter whom the Associated Press named one of the best songwriters of her generation. She has been praised by both Bob Dylan and Tom Waits, and her songs have been recorded by dozens of artists, including Jimmy Buffett, Blake Shelton, Tim McGraw and Candi Staton. Her songs have been used in film and television, most recently on the ABC hit show Nashville, HBO’s Banshee, and Masterpiece Theater’s Case Histories. She has released six studio albums. Her third album, Filth and Fire, was named #1 Best Independent CD of the year by Jon Pareles of the New York Times. Her following three releases have been named in the LA Times and New York Times top three releases of the year.

Two-time Grammy nominee Gretchen Peters has cut her own artistic path, touring continually in both North America and the U.K. and Europe, while releasing nine critically acclaimed albums on the way. The 25-year Nashville resident has accumulated accolades as a songwriter for artists as diverse as Etta James, Trisha Yearwood, Bonnie Raitt, The Neville Brothers, Patty Loveless, George Strait, Bryan Adams and Faith Hill. Her album Hello Cruel World (2012) landed in the Top Five on the Americana chart and maintained the #1 position for a record-breaking two months on the EuroAmericana chart. It was described by NPR’s All Things Considered as “the album of her career.”

Tickets, which are $40.00 in advance and $50.00 at the door, are available at www.stringbonepresents.com.