The Magical History tour is “coming to take you away” – back to the days when Beatlemania ran rampant.
The “British Invasion” can be relived, or if you missed it then, here’s a chance to live it now.
They love you, yeah, yeah, yeah and those mop-topped boys from Liverpool star in the Magical History Tour: A Beatles Memorabilia Exhibition. 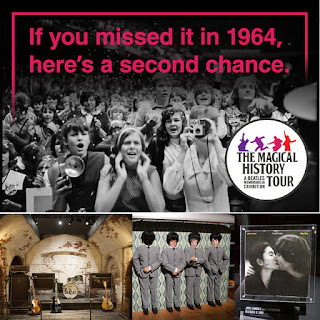 It’s now playing at the Henry Ford museum in Dearborn, Mich. through Sept. 18.
Metro Detroit finds itself being invaded again by the mop-topped “Brits” where Motown battled it out with them back in the day.
And, in Montreal at Fairmont’s Queen Elizabeth Hotel, all John Lennon and Yoko Ono were saying was “give peace a chance.”
Now their suite where you can stay overnight is being given a makeover.


And, the hits just keep on coming
“Popular culture has yet to experience another worldwide phenomenon on the scale of the Beatles since Beatlemania took the world by storm,” said the producers at Exhibits Development Group of St. Paul, Minn.
Their exhibition allows visitors to explore the entire Beatles story “through an inspirational journey of creativity, curiosity and love.”
This is the most-exhaustive Beatles exhibition ever assembled, with more than 150 artifacts from the private collection of Peter Miniaci & Associates.
“It includes interactive displays designed to give visitors a taste of what Paul McCartney, John Lennon, George Harrison and Ringo Starr were up to before, during and after their tenure as the Fab Four,” Billboard magazine reported.
This exhibition features the historical retrospective of their first days as the Quarrymen to the breakup and beyond.
It features instruments, clothing, rare photos and many never-before-displayed artifacts.
Visitors will experience pivotal points in their lives following the iconic story from the beginning, through the throes of Beatlemania, to the years of experimentation and dissention, and finally to their far-reaching inspiration today.

The beat goes on
There’s the original Quarrymen drum kit, personal belongings, letters, memos and documentation of the Beatles’ career.
This includes the “break-up letter” typed by John to Paul’s lawyer and signed by John, George and Ringo.
Fans can view a vast collection of Beatles merchandise and memorabilia, including the album signed by John Lennon to his eventual killer hours before his death.
After touring the exhibition, you can easily spend a day or more looking around the vast Henry Ford museum and the adjacent outdoor history marvel, Greenfield Village.
Tickets with admission to the Beatles and museum are $26 US, ages 12 to 61; $24, seniors, 62 plus; $20.75, youths, (free with paid adult ticket, walk up only) ages three to 11; and no charge for children to age two.
It’s at 20900 Oakwood Blvd., Dearborn (west of Detroit). Hours are 9:30 a.m. to 5 p.m., daily. thehenryford.org; (313) 982-6001

Give Peace a Chance
The John Lennon and Yoko Ono Suite where the “Bed-in for Peace” was held in 1969 is getting a modern makeover.
The world watched as a group of “long-haired hippies” took over Suite 1742 of Fairmont’s Queen Elizabeth Hotel in Montreal and the rest is history.
Lennon had all the furniture removed except for a mattress and held court to the world’s media to protest against the war in Vietnam and recorded the song Give Peace a Chance.
Staying there for a couple of nights, we could feel the “karma” and vibes of that epic sleepover.
It includes framed photos, sheet music and news articles along with gold records adorning the walls.
Now that hotel has closed for a $140-million “transformation” to open next June, “one of the most popular suites in the world” is getting modern, too, said Joanne Papineau, Fairmont’s regional director for public relations. 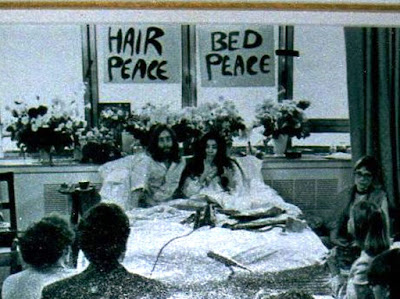 “It is going to be greatly improved – a much better experience, true to the Bed-in,” she said.
Architect Jean Pelland said they will be “creating an experience” in the suite.
“When people come in, they will get a greater sense of what happened there and how relevant that moment in time was with artifacts and videos being shown,” he added.
fairmont.com/queen-elizabeth-montreal

Jim Fox can be reached at onetanktrips@hotmail.com
For more One-Tank Trips: http://1tanktrips.blogspot.ca
Posted by Jim Fox at 1:06 PM