Stratford, ON (November 9, 2016) – String Bone Presents! Fred Eaglesmith (guitars & lead vocals) and Tiffani "Tif" Ginn (accordion & vocals) in concert November 18, 2016 at 8:00 pm at Stratford’s Revival House. This is a rare duo show. Their chemistry is second to none and together they have been making waves south of the border for about two years now to rave reviews. The concert will be intimate, hilarious and engaging. 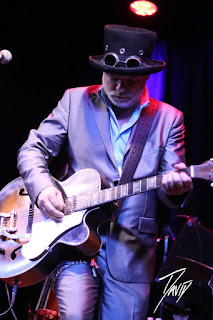 Acclaimed singer-songwriter Fred Eaglesmith has spent his lengthy career traveling the byways and highways of Canada and the United States – a true road dog. Unlike many of today’s artists, touring is not something he does some of the time or only in support of a new record. Touring is his life. Well respected in the music industry, Fred Eaglesmith is somewhat of a cult musician as he defies categorization. He is one of a kind in the very best way.

Fred Eaglesmith’s songs are about what he knows: hard work ethics, cars, trains, horses and relationships. In other words, rural Ontario living. In recent years, his songs have been covered by country superstars Toby Keith, Alan Jackson and Miranda Lambert.

Fred-Heads (fully fledged fans) and Fred fans alike will revel in those iconic “Fred” songs and they will hear lots of them during the concert. It will be one of those shows you will remember for a long time. While those new to his music can engage in his roots rock, alt-country, Americana sound.

Tif Ginn is a gutsy, amazing singer and a transcendent songwriter who has spent most of her adult life touring North America playing music professionally. She toured first as half of the Fabulous Ginn Sisters, releasing three critically acclaimed CDs, and then as part of the Fred Eaglesmith
Traveling Show.

Tickets for the Live at Revival House concert series are available at www.stringbonepresents.com. The website also contains information about dinner reservations at Revival House and accommodation at Foster’s Inn.

Revival House, formerly the Church Restaurant, is one of Stratford’s most iconic buildings. A former Baptist church-turned-fine dining restaurant, Revival House is co-owned and operated by Stratford native Rob Wigan and his wife Candice Wigan. The 1,676-square-metre property was gutted in the spring of 2014 and its majestic interior transformed into a “smart casual” restaurant and lounge with an expansive kitchen that embraces the local farm to table concept. Revival House was recently featured in enRoute, Air Canada’s inflight travel magazine.