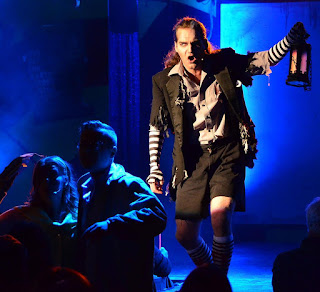 Get the full experience of Canadiana Productions’ performance of the cult classic, Oct. 30 to Nov. 2, 2019

NIAGARA FALLS, Ont. — There may not be another single movie or play that draws such a passionate response from its fan base than the Rocky Horror Show and its movie adaptation, The Rocky Horror Picture Show.

Around the world, when fans enter the theatre for either a screening or live performance, chances are better than even they are doing so in costume as their favourite character and are equipped with a small arsenal of items they will use to connect themselves to the show in a way that simply doesn’t happen for other films or plays.

“When it comes to Rocky Horror, audience participation is not encouraged; it is mandatory,” says Lee Siegel, Artistic Director of Canadiana Productions, the Niagara Falls-based dinner theatre company that is preparing to stage its 17th performance of Rocky Horror this Halloween. “There is nothing in theatre quite like the interaction between the audience and performers during Rocky Horror.”


For the uninitiated, Rocky Horror follows a young couple — the engaged Brad Majors and Janet Weiss — who run into car trouble and seek the assistance from the inhabitants of a strange house nearby. Little do they know chief resident Dr. Frank ‘N’ Furter is in the midst of a maniacal experiment, with the help of his quirky staff and groupies Riff-Raff, Magenta, Columbia, Rocky and more.

But as a member of the audience, you are expected to do more than just sit there and watch the story unfold. To get the most of Rocky Horror:

To assist with audience interaction, Positive Living Niagara will be selling audience participation kits that contain all of the essentials:

All of the proceeds from the participation kits goes to Positive Living Niagara, which provides support, education  and advocacy in a safe and confidential environment for HIV-positive individuals, their families, and their friends. This initiative has raised more than $125,000 for Positive Living Niagara over the years.

Canadiana Productions is moving its 17th performance of Rocky Horror from its Log Cabin Theatre on Lundy’s Lane to the larger — and more Rocky Horror-suitable — Seneca Queen Theatre in downtown Niagara Falls. The historic movie theatre is the ideal venue for the cult classic play, and will provide the perfect setting for its audience. There will be a licensed bar on site.

The downtown venue also creates a great opportunity for groups to make a night of it, frequenting a local Niagara Falls bar or restaurant downtown before or after the show for a few drinks and dinner.

Parking is available throughout the downtown core — including behind the theatre, at the nearby medical centre, along the street or at the old farmer’s market.

About Canadiana Productions:
Housed in the Log Cabin Theatre on Lundy’s Lane in Niagara Falls, Ontario, Canadiana Productions has been staging award-winning dinner theatres shows since 1994. It’s flagship production, the Oh Canada Eh? Dinner Show, performed annually from April to mid-October, pays tribute to more than 50 songs by more than 30 Canadian recording artists while hitting on almost every Canadian stereotype. Over the winter months, Canadiana Productions stages other musical productions and annual fundraisers for various charity organizations including new Murder Mystery events and the Rocky Horror Show.
-30-
Posted by Jim Fox at 1:46 PM