Snowbird sightings across Ontario as weather is for the birds

One-Tank Trip for March 17/12
(c) By Jim Fox
This weather is for the birds.
Just as the swallows are returning to San Juan Capistrano, the swans are headed back to the Avon River, waterfowl are frolicking in Presqu'ile Bay and tundra swans are making pit stops at Jack Miner’s place and North Lambton.
Honk, honk, beep, beep
All the world’s a stage in Stratford and the swans are no exception.
Salute to Spring is an annual tradition highlighted by swans performing in a musical march to the Avon River.
The pomp and ceremony on April 1 at 2 p.m. has the swans led by the Stratford Police Pipes and Drums along a parade route.
About 28 of these flat-footed waddlers have been cooped up in their winter quarters at William Allman Arena and can’t wait to return to freedom.
"The lengthening daylight hours trigger a hormonal response in the swans and they need to get back out onto the river to establish their territories," said Cathy Rehberg of the Stratford Tourism Alliance. 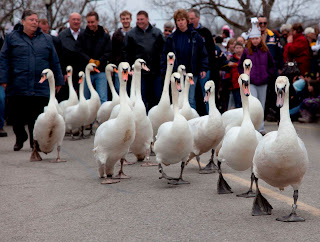 Onlookers cheer on the noisy procession that has included Chinese geese, an emperor and bar-headed goose and black swans.
The event is a weekend celebration with Swan Quest on March 31 as downtown businesses ask visitors to judge their “distinctive topiary swan” displays.
There are also carriage rides and spring garden workshops as well as a guided walk to view the swans, hear about the regal birds and watch a video documentary about a year in their lives.
The April 1 Swan Celebration takes place along Lakeside Drive, between Waterloo Street and Morenz Drive, from noon to 4 p.m.
There are children’s activities, a swan photo exhibit, barbecue and swan walks before the parade.
More information: www.visitstratford.ca/swans; 1-800-561-7926 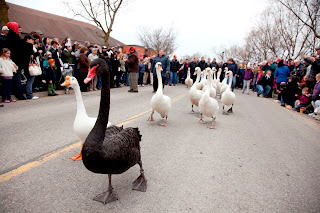 Giving winter the swan song
Tens of thousands of ducks, geese and swans are returning to Presqu'ile Bay near Brighton, east of Toronto.
The 36th annual Presqu’ile Provincial Park Waterfowl Weekend is on today and tomorrow from 10 a.m. to 4 p.m. to view up to 25 different species of waterfowl.
They arrive each spring to rest and feed before moving on to nesting areas further north and west and can continue to be seen throughout the month.
“Presqu’ile has some of the greatest concentrations of waterfowl and has easy access to good viewing locations,” said park naturalist Lisa McPherson.
Entrance fee is $8 a vehicle. www.friendsofpresquile.on.ca; (613) 475-4324, Ext. 225
Visit Wild Goose Jack’s
Visitors can “connect with nature” at the Jack Miner Bird Sanctuary on Highway 3 in Kingsville.
Known as “Wild Goose Jack,” Miner established his bird sanctuary 108 years ago and it is where thousands of geese and ducks stop by while migrating.
It remains free to visit (donations welcomed) and is not only is a great spot to watch migrating critters but to feed geese and ducks with the free supplied barley.
Visitors can explore the 400-acre (162-hectare) site to learn about local wildlife and natural habitats and see peacocks, exotic pheasants, wild turkeys and tundra swans.
The museum has historical memorabilia including the original catching net of Miner who pioneered the tagging of migrating waterfowl.
It’s open Monday through Saturday from 8 a.m. to 5 p.m. (closed Sundays). www.jackminer.com; 1-877-289-8328
Wings over Rondeau
Rondeau Provincial Park’s Wings of Spring waterfowl migration festival highlights the spectacle of returning ducks and tundra swans along the shores of Lake Erie at RR1, Morpeth, southeast of Chatham.
The event today and tomorrow from 10 a.m. to 4 p.m. has waterfowl viewing stations, birdhouse building demonstration, wagon rides and barbecues, local artisans and crafts for children.
The Ontario Falconry Centre puts on birds of prey shows at 1 p.m. each day.
www.rondeauprovincialpark.ca; (519) 674-1777
Early birds
Tundra (or whistling) swans have been arriving earlier this year at the Old Thedford Bog, eight kilometres south of Grand Bend.
Some 15,000 of the majestic birds make the pit stop here to feed and rest en route 6,500 kilometres to the Arctic from the Chesapeake Bay in Delaware.
They are attracted to the bog behind the Lambton Heritage Museum by the melting water and remnants of the prior year’s corn crop.
The Return of the Swans festival is on daily now through April 1 from 10 a.m. to 5 p.m. at the museum. www.returnoftheswans.com; 1-800-265-0316
-30-
Jim Fox can be reached at onetanktrips@hotmail.com
Posted by Jim Fox at 2:21 PM