This is the year for milestone events including the 100th anniversary of Sunshine Sketches by Stephen Leacock, the Stratford Shakespeare Festival’s 60th and the 45-year-old Mennonite Quilt Auction.
Make plans now to attend special activities to mark these significant events.

Sunshine sketches
It was a century ago that Leacock penned Sunshine Sketches of a Little Town that put Orillia – make that Mariposa – on the map.
Considered to be one of the most enduring classics of Canadian humorous literature, it created the fictional setting of Mariposa, a small town on the shores of Lake Wissanotti.
In reality, Leacock’s tales came from his lakeside retreat in Orillia with most of the engaging cast of characters based on local townspeople (names changed to protect the guilty). 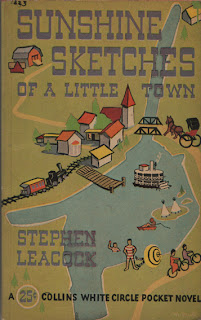 It was typical small-town anywhere as Leacock wrote that Mariposa is not a real town, but “about 70 or 80 of them . . . with the same square streets and the same maple trees and the same churches and hotels.”
Visitors can see the recreated boathouse that was his writing studio on Old Brewery Bay on Lake Couchiching as well as the main house that’s now the Leacock Museum National Historic Site.

The whole city will take a step back in time for the annual Sunshine City Festival from Aug. 17 to 19 to honour one of their most-famous luminaries.
“It’s a chance for us to celebrate our heritage and to mark the achievements of our best-known and most prominent Orillian, Stephen Leacock,” said Mayor Angelo Orsi.
Darcy Hoover, city marketing manager, said it will “offer a glimpse into Orillia’s heritage and life as it was in Ontario and in Canada at the time Leacock’s renowned story collection first appeared in print.”
There will be horse-and-buggy rides, antique cars, hot-air balloon rides and a heritage carnival.
“Visitors will be able to get an old-fashioned shave, see a 1912 fashion show, hear live music and see vaudeville-style performances as well as enjoy a slice of homemade pie or an ice cream float – and of course Stephen Leacock will be there, too,” Hoover said.
To learn more, go to www.leacockmuseum.com or call (705) 329-1908
To be, or not to be at 60
It began in 1953 with just two productions in a tent and now has become “North America’s premier repertory theatre.”
As the Stratford Shakespeare Festival’s 60th season approaches, the celebration will be highlighted by “14 glorious productions in five venues,” said publicity director Ann Swerdfager.
Canadian Christopher Plummer, who just won the best-supporting actor Oscar, will perform his one-person show, A Word or Two, that he adapted and arranged.
The curtain rises from April 12 to Oct. 28 for what is to be a “tremendous celebration,” said artistic director Des McAnuff.
“Our playbill ranges from the very roots of drama, the tragedy of ancient Greece, to some of the finest playwrights working in Canada today,” he said.
There will also be Shakespearean comedy, history and romance, along with a varied musical theatre repertoire.
Performances include Henry V; the War of 1812; the Matchmaker; Cymbeline; Much Ado About Nothing; Elektra; You’re a Good Man, Charlie Brown; MacHomer; the Pirates of Penzance; 42nd Street; and world premieres of the Best Brothers, Hirsch and Wanderlust. www.stratfordfestival.ca; 1-800-567-1600

A stitch in time
An auction of colourful quilts that started 45 years ago has helped to provide much-needed funds to support humanitarian missions around the world.
The Mennonite Relief Sale at the New Hamburg Fairgrounds, between Stratford and Waterloo, takes place on the last Friday and Saturday of May.
It features some 200 hand-made quilts at an old-fashioned auction sale along with enjoying food that really "schmecks" – tasty and flavourful – as it's often described, including legendary strawberry pies.
There are also sales of handcrafted furniture, plants, flowers, shrubs, vintage treasures and a pancake breakfast and children's activities.
All money raised goes to the Mennonite Central Committee that has received $14 million to date from the quilt event.
There will be a preview of the quilts on April 16 at a dinner at Bingeman Park in Kitchener and from April 26 to May 22 in the Kitchener City Hall Rotunda. http://nhmrs.com; 1-888-622-6337

Jim Fox can be reached at onetanktrips@hotmail.com
Posted by Jim Fox at 5:40 PM