All aboard! The St. Jacobs & Aberfoyle Model Railway still chugging along

Clear the track, here comes the St. Jacobs & Aberfoyle Model Railway.
The railway has left Aberfoyle station, pulling up stakes (spikes) and chugged off to the tourist-friendly town of St. Jacobs, north of Kitchener-Waterloo.
And, just in time for the holiday season, the “Christmas Train” returned this week, said Mike Craig, executive director and grandson of the railway founder.
It includes a gondola carrying Santa with his sleigh, reindeer including Rudolf with his lighted nose and stacks of presents.
The train is pulled by a steam engine and consists of five cars, all of which are lighted.
There’s a boxcar covered in multi-coloured lights, a gondola car filled with lighted Christmas trees and another “pulling heaps of snow with a Merry Christmas sign stuck in them,” he said.


The last two cars are filled with presents and illuminated with candy cane lights while Santa and his entourage bring up the rear.
Visitors are encouraged to come out and see the train set they’ve created in a true labour of love.
The seasonal train display continues weekends through the end of the year.

All aboard
Since losing its home due to development around the Aberfoyle Flea Market, it took the help of thousands of volunteer hours to move and restore the massive rail display.
To get out of Aberfoyle, Craig said the display was cut into 51 sections and moved the 40 kilometres to its new home.
Then, reassembling, rewiring and setting everything up took 14 months.
The O-scale model layout depicting Southern Ontario in the late 1950s is now owned and operated by the Waterloo County Heritage Preservation Inc. registered charity.
The elaborate layout covers 279-square metres and is one of Canada’s most detailed displays.
It features intricate replicas of city and rural scenes with hand-built models of the Canadian National and Canadian Pacific railways.

Working on the railroad
Visitors will see both of Canada’s major railways running on separate rights-of-way.
Freight trains are made up in terminal yards and then switched along their routes.
There are lighted passenger cars, with full interior detailing to recreate the great rail era, departing major urban terminals and passing suburban stations and small rural depots.
Models of late steam locomotives and first-generation diesels, authentically detailed for specific prototypes, provide the power.
The trains run through scenic countryside, passing fields, rivers, towns, a large city and part of the Niagara Escarpment.
New is a barn raising and Mennonite meeting hall joining many recognizable industries and structures from that era.
Depicted are the CPR West Toronto station, Hamilton’s Royal Connaught Hotel, the old Galt post office and Guelph’s historic city hall.
A crowd pleaser is the night scene when the room lighting dims and hundreds of tiny lights come on inside the buildings.
As night deepens, many of the house lights go out and you can hear the lonely whistles of the trains through the night before day break.
There’s also the Canadian, an eight-car version of CPR's transcontinental train in its original 1955 colours. Passenger cars are fully detailed with lighted interiors and riders.


There are more than 250 freight cars depicting the variety of equipment with original-style wooden cabooses.
It takes six operators in a control tower above the viewing floor to run everything.
Craig’s grandfather, the late Frank Dubery, with help from grandma Gay originally got up a head of steam and opened the original Aberfoyle Junction in 1972.
The display was a single track branch line crossing a double track main and the junction was the centrepiece, and it grew from there.
Along with the Duberys, the railway’s “original six” creators were Chuck and Gwen Bard,Wayne Pfieffer and Craig Webb. 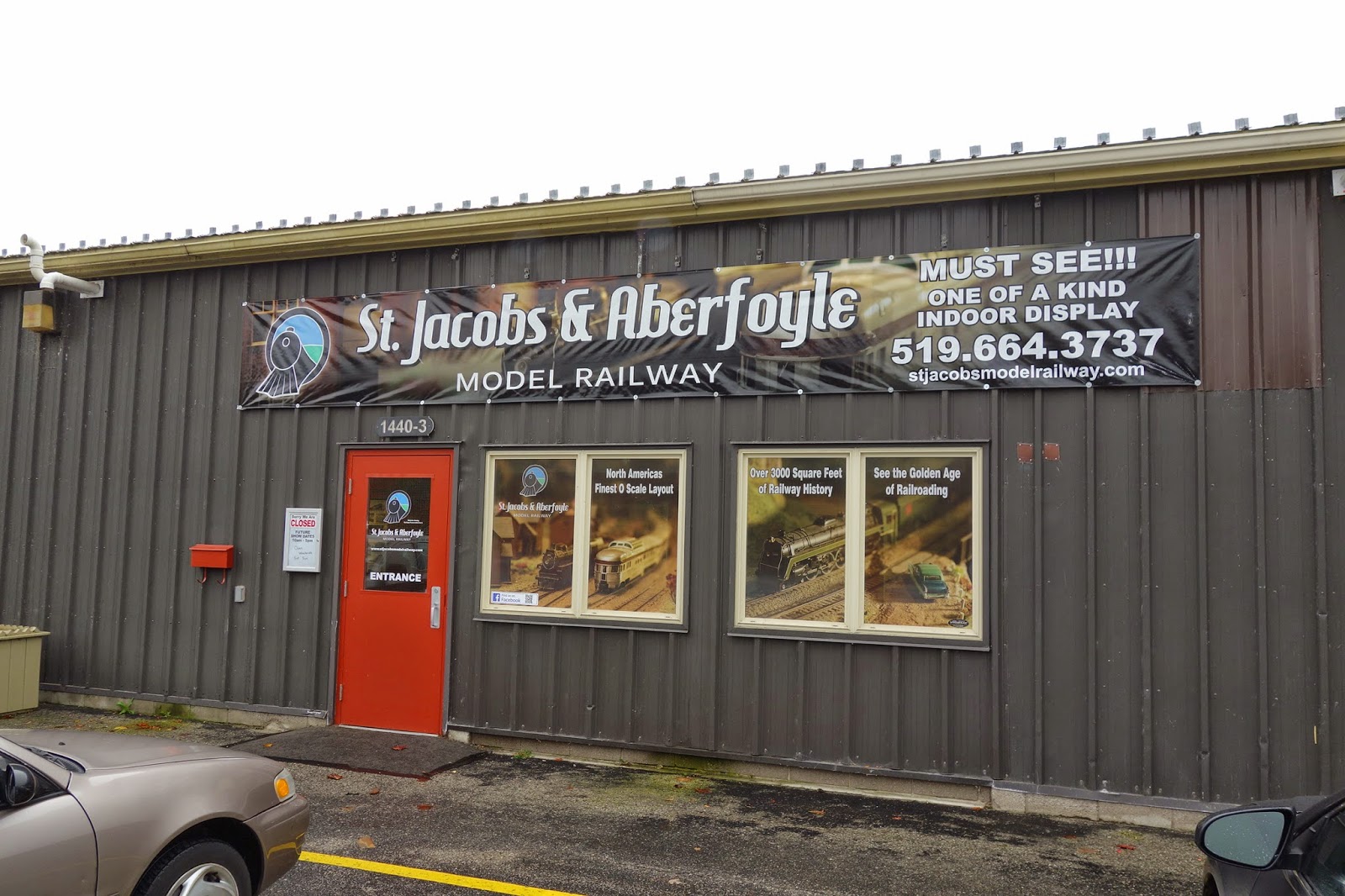 Jim Fox can be reached at onetanktrips@hotmail.com
For more One-Tank Trips: http://1tanktrips.blogspot.ca
Posted by Jim Fox at 3:43 PM