Casino Rama is thrilled to confirm we have been added to the much anticipated new tour by Canadian comedian Russell Peters: 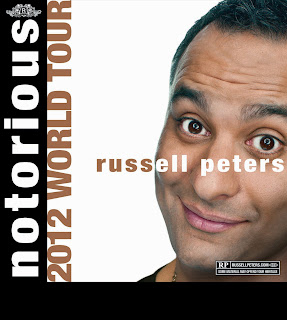 Tickets go on-sale to the general public on Tuesday, July 17 at 12 noon and will be available in-person at the Casino Rama Box Office, at all TicketMaster locations, by calling toll free 1-877-599-RAMA (7262) and online at www.casinorama.com. Ticket prices do not include applicable taxes or service charges.

PER SHOW TICKET LIMIT:  Ticket limit is 8 per customer per show.  Please adhere to published ticket limits.  Orders exceeding the ticket limit may be cancelled without notice by TicketMaster at its discretion.  This includes duplicate orders having the same billing address or credit card.

Casino Rama is proud to be a strong community partner providing on-going, year-round support to a variety of local organizations.  We are pleased to announce that Russell Peters has generously donated his time in the form of Meet & Greet opportunities for his Thursday, October 18th show that may be purchased to support Breast Cancer Awareness month.  More details on the Meet & Greets will be available on TicketMaster Canada in the coming weeks.  We thank Mr. Peters for his generous donation and pledge that 100% of the proceeds from the purchases will be donated to the local chapter of a Breast Cancer organization.
Operating since July 31, 1996, Casino Rama is Ontario's only First Nations commercial casino.  The Casino offers a complete entertainment experience with over 2,500 slot machines, more than 110 gaming tables, 10 unique restaurants, a world-class 5,000 seat Entertainment Centre, and a 300-room all-suite, full-service hotel, featuring spa and health club facilities.  Casino Rama is operated by Penn National Gaming, Inc.