Tails are wagging at a one-of-a-kind animal sanctuary that’s a perfect Sunday drive in the country.
There’s an open invitation for day-trippers to visit Dog Tales Rescue and Sanctuary north of Toronto in the picturesque horse farm community of King City and return home with a new family member.
This special place for dogs has found “forever homes” for about 100 canines so far his year, said office manager Yvonne Yu.
“The number of visitors has been picking up since we opened up to the public for our Sunday adoption days (from 10 a.m. to 6 p.m.),” she added.
As well, the first annual Dog Tales Festival is planned for Aug. 8 and 9 from 10 a.m. to 6 p.m., with free admission.
Activities include dog diving and spa, search-and-rescue dog display, breed specific rescue, draft horses on parade, vendors with doggie items, artisans, music, wine tasting, food stalls with “gourmet treats” and activities for the kids.


Opening the sanctuary, now with about 80 dogs and 34 horses in its “Horse Haven,” is a “dream come true” for animal lovers Rob Scheinberg and Danielle Eden.
The husband-wife team are behind the private, not-for-profit venture tucked among the rolling hills and offering a country-club setting for the dogs and horses – the lucky ones that have been rescued from “dire conditions.”
Their goal was to create “something grand,” inspired by the four dogs they rescued from shelters in Israel.

Frisky filly
Visitors can see the newest resident, JiJi, a week-old filly and her mom, Gia, who was saved from slaughter while pregnant.
There’s also a second horse baby, called Butter, enjoying romps among the 20 hectares of green fields, rolling hills and woods.
People are encouraged to drop by whether interested in adopting or just to see the surroundings and they can bring their pets, Scheinberg said.
They’ll discover this isn’t your usual animal shelter where, instead of cages, living spaces are opulent and furnished with “comfy beds” such as custom-made divans and refinished antique sofas.
There are chandeliers, original animal art work, silver-plated eating and drinking bowls, and private glass-fronted kennels.
Eden said she wanted to create a space for neglected dogs to heal, rehabilitate and recover from difficult pasts and in a way become accustomed to life at home while they await adoption.
The centre has come a long way since it officially opened last October when 500 people attended the festivities and met the first arrivals – 12 dogs and four horses.
It was thought that most of the animals would be rescued primarily in Ontario and Quebec, as well as Israel because Dog Tales works with a rescue group there.
Dogs have come from other countries including Egypt, Greece, the United States as well as “local surrenders” and Quebec.
The sanctuary recently received more than 40 dogs from a “high-kill shelter” in Miami.
Horse Haven on the site has a stable for some 40 animals that include those abused and neglected, saved from slaughter or were unwanted retired racehorses.
This offers the horses a “happy fulfilling place to spend their final years and with access to outstanding medical and farrier care, good food, room to roam, love and attention,” Scheinberg said.
Two of the horses are currently available for adoption while the others are content to spend their “golden years” there. 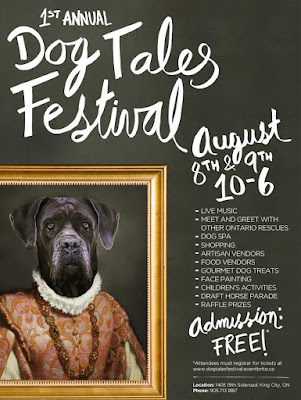 Let’s go home
The adoption process involves meeting the dogs, filling out an application and having an “interview/meet and greet.
If the potential adoptees have a dog, a time is scheduled for them to bring their critter in to make sure that they get along, with same-day adoptions possible.
The adoption fee is $375 plus tax ($600 for horses) and the animal is neutered/spayed, vaccinated, microchipped and given a session with a trainer, if needed.

Jim Fox can be reached at onetanktrips@hotmail.com
For more One-Tank Trips: http://1tanktrips.blogspot.ca
Posted by Jim Fox at 2:54 PM