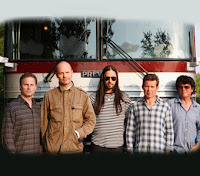 Fully Completely, the third full-length album by The Tragically Hip, was originally released on October 6, 1992.
Fully Completely reached #1 in Canada and went on to sell more than a million copies (certified Diamond by Music Canada in January 2007) while spawning hit singles “Locked in the Trunk of a Car”, “Courage” (For Hugh McLennan), “At the Hundredth Meridian” and “Fifty Mission Cap”, “Looking For A Place To Happen”, “Wheat Kings” and “Fully Completely”.

Critically acclaimed for more than two decades, The Tragically Hip has been at the heart of the Canadian musical zeitgeist, evoking a strong emotional connection between their music and their fans that remains unrivalled in this country.  A five-piece group of friends including Rob Baker (guitar), Gord Downie (vocals, guitar), Johnny Fay (drums), Paul Langlois (guitar) and Gord Sinclair (bass), who grew up in Kingston, Ontario, The Hip has achieved the enviable status of a band that enjoys both mass popularity with more than 8 million albums sold worldwide, as well as peer recognition through 14 Juno Awards from more than a dozen recordings.

Fans are invited to visit the Casino Rama Resort Facebook page to gain access to an exclusive pre-sale, along with a chance to beat the box office to win a pair of tickets to see this truly Canadian band live.

Exclusive advanced in-person ticket purchase for Players Passport® Club Members begins Sunday, July 5th at 12 noon only at the Casino Rama Box Office. Advanced online ticket purchase for Facebook Fans & Club Members begins on Monday, July 6th at 12 noon at www.ticketmaster.ca or by calling toll free 1-877-599-RAMA (7262). A special code is required for Monday’s advance purchase period which can be found on the Casino Rama Resort Facebook page.
Tickets go on-sale to the general public on Wednesday, July 8th at 12 noon and will be available in-person at the Casino Rama Box Office, at all TicketMaster locations, by calling toll free 1-877-599-RAMA (7262) and online at www.casinorama.com. Ticket prices do not include applicable taxes or service charges.

PER SHOW TICKET LIMIT:  Ticket limit is 8 per customer per show.  Please adhere to published ticket limits.  Orders exceeding the ticket limit may be cancelled without notice by TicketMaster at its discretion.  This includes duplicate orders having the same billing address or credit card.
Must be nineteen (19) years of age or older with government issued photo identification to attend concerts & events.  Those who have been trespassed and/or self-excluded from Casino Rama or any OLG property may not visit Casino Rama, participate in promotions and/or redeem offers.
Operating since July 31, 1996, Casino Rama is Ontario's only First Nations commercial casino and has earned a reputation for presenting exclusive world-class sporting, entertainment & television events. The Casino offers a complete entertainment experience with over 2,500 slot machines, more than 100 gaming tables, 8 unique restaurants, a world-class 5,000 seat Entertainment Centre, and a 300-room all-suite, full-service hotel, featuring spa and health club facilities. Casino Rama is operated by Penn National Gaming, Inc.