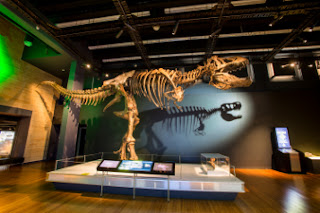 WATERLOO REGION – A blockbuster exhibit Tyrannosaurs – Meet the Family makes its North American premiere at the Waterloo Region Museum in Kitchener, Ontario this winter and is on exhibit from February 3 to April 30.

Tyrannosaurs – Meet the Family, developed by the Australian Museum, is an innovative, hands-on immersive experience. Come face-to-face with life-sized dinosaur skeletons, including ‘Scotty’ the Tyrannosaurus rex.

“We’re thrilled to bring this incredible exhibit about Tyrannosaurs to Canada,” said Geoff Lorentz, Regional Councillor and Chair of the Region of Waterloo Community Services Committee.

“Tyrannosaurs – Meet the Family provides a snapshot of dinosaur life and shows how this group of animals became the world’s top predators with their massive skulls, powerful jaws and bone-crunching teeth. Who isn’t fascinated by dinosaurs!” said Tom Reitz, Manager/Curator of the Waterloo Region Museum.

The Waterloo Region Museum anticipates record crowds to see this world class exhibition that is on exhibit during Family Day weekend and March Break.


In order to accommodate demand, the museum is extending open hours to 8 p.m. on February 23, March 23 and April 13.

Tyrannosaurs – Meet the Family features many family activities and is appropriate for people of all ages, including children over 3 years of age. Highlights include:
·         The first exhibition to showcase the revised tyrannosaur family tree
·         More than 10 life-sized dinosaur specimens on display
·         Meet Guanlong wucaii – the newly discovered feathery relative of T. rex
·         Learn how recent scientific findings confirm the links between dinosaurs and birds
·         Using multi-touch technologies, visitors can compare their arm strength to that of a mighty T. rex

The exhibit includes a table-top video game that multiple people can play at the same time. Players hatch mystery Tyrannosaurs and have to place them correctly on the  family tree of dinosaurs. If you place all the dinosaurs in the right order, a giant meteor wipes them all out – demonstrating the mass extinction which they faced.
Visitors can download the free Tyrannosaurs gaming app, already downloaded more than 2 million times, and have fun hatching dinosaur eggs and collecting them while discovering secrets behind this formidable dinosaur family.

This exhibition was developed by the Australian Museum and is toured internationally by Flying Fish.

Tyrannosaurs – Meet the Family is on exhibit from February 3 to April 30, and is included with general admission. Waterloo Region Museum is located at 10 Huron Rd., in Kitchener, ON.