Say “cheese!”
Many people will be doing just that today and the next three Saturdays at Oxford County’s Big Cheese Days.
The year’s event in and around Woodstock is “bigger, better and cheesier,” organizers say with a month-long event, up from one day last year. 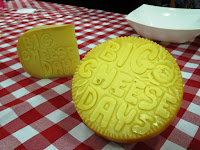 After all, this is known as Canada’s Dairy Capital and is the place for “curd nerds.”
Visitors are invited to tour and taste their way along the Oxford County Cheese Trail.
There they can learn all about cheese-making, snack on creative cuisine featuring local cheeses, shop for cheese, related accessories and antiques or learn about the region’s more than 150 years of cheese history, said publicist Virginia Lewis for Oxford County Tourism.


The trail offers “23 unique stops that will appeal to cheese lovers of all ages,” she said.
Events include cheese-maker tours at Gunn’s Hill Artisan Cheese in Woodstock and Moutainoak Cheese in New Hamburg where there’s also a robotic milking demonstration.
Upper Thames Brewery in Woodstock will have live music and beer-and-cheese pairings.
There will be “fun photo ops” and cheese-themed games at the Ingersoll Cheese Museum and pop-up exhibits at the Woodstock Art Gallery.
Oxford County’s reputation as a world-class, cheese-producing region dates back to 1866 when local cheese makers sent a 3,311-kilogram wheel of cheese to the New York World’s Fair and then onto Great Britain.
The wheel, which was the equivalent of 66,200 servings of cheese, created quite an international stir and resulted in some 300,000 boxes of Oxford County cheese being shipped to Britain the next year.
Today, the region’s cheese is still capturing attention due to the world-class producers found along the cheese trail, Lewis said.
They are Bright Cheese and Butter Manufacturing Co.; Gunn’s Hill Artisan Cheese; Local Dairy Products; Mountainoak Cheese; and Quality Sheep Milk.
“The pride the community feels toward its dairy heritage is illustrated around every twist and turn in the county,” said Meredith Maywood of Tourism Oxford.
“From the Springbank Snow Countess monument – a concrete replica of the cow that held the world record for butterfat production – to Ingersoll’s “Cheesy Playground,” where young cheese lovers can crawl through holes in giant slices of cheese or take a spin on a blue cheese wheel, there’s no questioning the dairy pride,” she added.

Smile and say . . .
Be a cheddar judge at Bright Cheese and Butter, churn butter at the Norwich Museum, sample local cheese and appetizers at the Dairy Capital Cheese Shoppe in Woodstock and enjoy the Cheese Trail Trio Menu at the Olde Bakery Cafe in Ingersoll.
Other taste treats include apple pie grilled cheese at Leaping Deer Adventure Farm and the Memphis Blaze Pizza that includes spicy Chihuahua cheese at Louie’s Pizza and Pasta, both in Ingersoll.
There’s a featured quiche with local cheese at the Cup and Cake in Tillsonburg and a cheese board and wine pairing at Sixthirtynine restaurant in Woodstock.
Make it a weekend with the Oxford County Cheese Trail Package at the Elm Hurst Inn in Ingersoll; the Gunn's Hill Breakfast Package at R Wee Inn in Otterville; or the Sparkling Wine and Cheese Package at Chateau la Motte in Woodstock.
For details about Big Cheese Days, including a downloadable trail map and special offers, go to oxfordcountycheesetrail.ca; 1-866-801-7368

Moo to you, too
Gunn’s Hill Artisan Cheese and Upper Thames Brewing have combined their artisanal expertise to make a delicious cheese.
Driven by “a love for locally crafted artisanal cheese and beer,” the two paired up to create the Dark Side of the Moo cheese.
Gunn’s Hill uses its Oxford Harvest cheese to soak in Upper Thames’ Dark Side chocolate stout beer for three days and then ages it for three months.
The brewery has hosted beer-and-cheese pairings with the cheese company with “excellent” results, said Colleen Bator, co-owner of Gunn’s Hill.

Jim Fox can be reached at onetanktrips@hotmail.com
For more One-Tank Trips: http://1tanktrips.blogspot.ca
Posted by Jim Fox at 10:25 AM