Somewhat of a chameleon, Jeremy Fisher’s sound has evolved over the years, from “honest and heartfelt” lounge ballads to incorporating touchstones of popular culture into his songs. Although the palette is different, the songs are as thoughtful and interesting as ever, and he plays songs from his entire catalogue whenever he performs live. He has toured the world, as well as North America, opening for The Proclaimers; shared the stage with Sarah Slean; recorded with Hawksley Workman; and traded-off lines with Serena Rider. His last two shows in Stratford sold out. 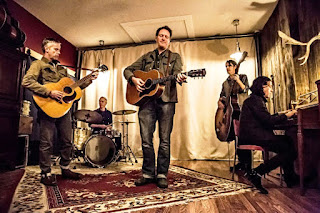 NQ Arbuckle (Neville Quinlan) is the good-natured frontman, songwriter and voice behind the Canadian alt-country band NQ Arbuckle. He performed solo before bringing in a band to back him up. The Montreal-born Neville Quinlan (the NQ of the band's name) and his sturdy combo have been having a blast on the Canadian club circuit for more than 10 years with a string of critically-acclaimed recordings and multiple Juno nominations. The Toronto-based singer-songwriter is well known for putting on a terrific show with his gruff but wise roots-rock songs. The Canadian indie label, Six Shooter Records, has released four NQ Arbuckle albums, including The Future Happens Anyway (2014), described as “poetic and passionate.”

Tickets for the Live at Revival House concert series are available at www.stringbonepresents.com. The website also contains information about dinner reservations at Revival House and accommodation at Foster’s Inn. Dinner is optional, but encouraged and must be reserved separately through the venue.


Revival House, formerly the Church Restaurant, is one of Stratford’s most iconic buildings. A former Baptist church-turned-fine dining restaurant, Revival House is co-owned and operated by Stratford native Rob Wigan and his wife Candice Wigan. The 1,676-square-metre property was gutted in the spring of 2014 and its majestic interior transformed into a “smart casual” restaurant and lounge with an expansive kitchen that embraces the local farm to table concept. Revival House was featured in enRoute, Air Canada’s inflight travel magazine, as a “must visit” spot to enjoy while visiting southern Ontario.