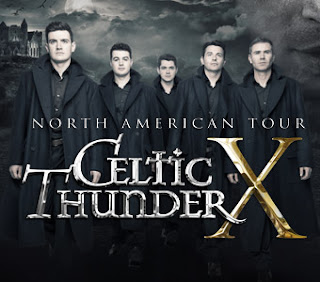 (News Release)
RAMA, ON – Casino Rama Resort is excited to celebrate St. Patrick’s Day a little early with the announce of Celtic Thunder returning to the Great Indoors with the Celtic Thunder X tour, celebrating the groups 10th anniversary. The multi-platinum Irish performers are set to play the award-winning Entertainment Centre this fall, Friday, October 5 (9 PM).

No Celtic Thunder show would be complete without an encore of their rousing anthem “Ireland’s Call”, the only song in CELTIC THUNDER X that isn’t new but which never fails to bring the audience to its feet.


“We had a blast making CELTIC THUNDER X. The music choices were carefully selected to suit each member’s personality and gave us something we could really dig our teeth into. The musical arrangements, the orchestra and the band are all great, and they really helped to create our best show to date. We love singing songs that are a perfect mix of traditional and contemporary Irish Songs, along with the fun we have performing hit songs that are known worldwide." Damian, Michael, Emmet, Ryan & Neil, Celtic Thunder.

The Celtic Thunder official YouTube channel, “Thunder Tube” has received over 98 million views since 2008 and has more than 138,000 subscribers. The Celtic Thunder website www.celticthunder.com reached over 5.3 million users last year.

Their Facebook www.facebook.com/celticthunder  has 461,000 followers and over 42,000 on Twitter https://twitter.com/CelticThunder. www.theceltictimes.com , Celtic Thunders monthly newzine has a readership of 1.2 million and 100,000 subscribers. Celtic Thunder has appeared on multiple national TV programs including The Today Show, CBS Early Show Saturday, Fox & Friends, QVC, and numerous regional shows in major cities.

Tickets are available in-person at the Casino Rama Resort Box Office, on www.ticketmaster.ca or by calling toll free 1-877-599-RAMA (7262) and online at www.casinorama.com. Ticket prices are inclusive of taxes and exclude any applicable service fees. Ticketmaster is the only authorized seller of Casino Rama Resort concert tickets.

PER SHOW TICKET LIMIT: Ticket limit is 6 per customer per show. Please adhere to published ticket limits. Orders exceeding the ticket limit may be cancelled without notice by Ticketmaster at its discretion. This includes duplicate orders having the same billing address or credit card.
Patrons must be nineteen (19) years of age or older with government issued photo identification; those twenty-one (21) years of age or younger must also have a secondary piece of name identification. Those who have been trespassed and/or self-excluded from Casino Rama Resort or any Ontario gaming property and/or fail to meet Casino Rama Resort’s conditions of entry may not visit, participate in promotions and/or redeem offers.

Casino Rama Resort is Ontario's only First Nations resort casino and has earned a reputation for presenting exclusive world-class sporting, entertainment & television events. The Casino offers a complete entertainment experience with over 2,500 slot machines, more than 100 gaming tables, 8 unique restaurants, a world-class 5,000 seat Entertainment Centre, and a 300-room all-suite, full-service hotel, featuring spa and health club facilities. Through the Casino Rama Cares program we are dedicated to continuing our rich history of community support by being an outstanding corporate neighbour; providing year-round assistance through a combination of charitable giving and employee volunteerism. Casino Rama Resort is operated by Penn National Gaming, Inc.