CP Holiday Trains are a colourful sight crossing Canada and parts of the U.S.

Clear the tracks as the Canadian Pacific Holiday Train is being readied to ride the rails spreading joy across Canada and parts of the U.S.
The elaborately decorated train – actually two train sets – will set out in November from Montreal to “entertain hundreds of thousands of people.”
It will make stops in 171 communities along CP’s network with parties by the tracks and at local railway stations.
Coming soon to a city or town near you, the festive trains will be collecting food and money for food banks across North America.
CP has revealed this year’s stops, including some new ones, and the entertainers riding the rails.
This is the 20th annual tour and a “privilege” to run the program and connect with so many communities, said Keith Creel, CP president and chief executive.
The trains each have 14 brightly decorated rail cars consisting of hundreds of thousands of LED lights and holiday designs “celebrating the spirit of the giving season.”
The typical event lasting about 30 minutes has the train being welcomed at each stop by big crowds.


A stage door lowers and the band gets the party rolling with “a mix of traditional and modern holiday-themed songs.”
There are some brief speeches and a presentation involving local food bank officials and other “dignitaries.”
This is followed by a farewell encore song after which the train disappears down the tracks rolling on to its next stop.

Making tracks
The intensive journey has the U.S.-bound train departing Montreal on Nov. 25 travelling south with stops in Quebec, New York and southern Ontario.
It then continues its journey back into the U.S. and to southern Saskatchewan for its final stop in Weyburn on Dec. 16.
The Canadian Train departs Montreal on Nov. 27 and travels west through Ontario, Manitoba, Saskatchewan, Alberta and British Columbia for its final show of the tour in Port Coquitlam on Dec. 18.
First-time stops this year include Carberry, Man.; Gleichen, Alta.; Bensenville, Ill.; Ottumwa, Iowa and Chillicothe and Kansas City, Mo.
Entertainers on the U.S. train are the Sam Roberts Band and JoJo Mason entertaining at stops in Quebec, New York and Ontario.
The Trews will then hop on board with Willy Porter in Chicago to complete the trip through Illinois, Iowa, Missouri, Wisconsin, Minnesota and North Dakota before arriving at the final destination in Weyburn.
Onboard the Canadian train are Kelly Prescott joining Terri Clark and Sierra Noble to spread holiday cheer through Ontario, Manitoba, Saskatchewan and into Alberta to Calgary and Edmonton.
The Sam Roberts Band will then carry on through Alberta and British Columbia, joined by Kelly Prescott and Tracey Brown, to the final show in Port Coquitlam.
Among the stops in Ontario are London at the Richmond Street railway crossing between Oxford and Central on Nov. 29 along with Woodstock, Cambridge (Galt), Ayr and Toronto that day.
It will visit Chatham and Windsor on Nov. 30; Winnipeg, Dec. 3; Regina, Dec. 5; Calgary, Dec. 8; Edmonton, Dec. 10; Banff, Dec. 13; Kamloops, Dec. 16 and Port Moody, Dec. 18. 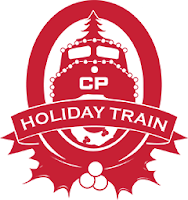 It’s free to join the parties and those attending are asked to bring a donation of food and/or cash for local food banks.
Since the program began in 1999, CP’s trains have raised more than $14.5 million and gathered 4.3-million pounds of food as well as $15 million for cardiac care and research.
More details and a full schedule of stops is available at cpr.ca/holiday-train

Jim Fox can be reached at onetanktrips@hotmail.com
For more One-Tank Trips: http://1tanktrips.blogspot.ca
Posted by Jim Fox at 6:44 PM