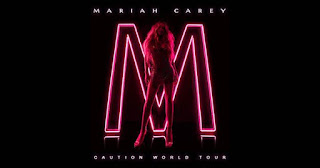 RAMA, ON (News Release) – International singing and song-writing icon Mariah Carey has announced her upcoming Caution World Tour is set to kick off in February 2019.

The multi-platinum selling, multiple Grammy Award winner will get closer to the fans with her most intimate tour yet. The once-in-a-lifetime 22-city run, produced by Live Nation, will play the award-winning Entertainment Centre at Casino Rama Resort Thursday, March 21 (8 PM).
Mariah Carey also revealed the release of her anxiously awaited 15th full-length studio album, Caution. The digital pre-order just went live, and it unlocks immediate downloads of brand-new song “The Distance,” recent single “With You,” and the first teaser track “GTFO.”

The order and exclusive new Caution merchandise are available at her official D2C store HERE. Carey’s last album, Me. I Am Mariah…The Elusive Chanteuse, was released in 2014. Carey is a music powerhouse and the best-selling female artist of all time with more than 200 million albums sold to date and 18 Billboard Hot 100 #1 singles (17 self-penned) to her name.


Prior to kicking off the 2019 tour, Mariah will be in Las Vegas to continue her residency at Caesars Palace Colosseum with The Butterfly Returns.
CONCERT DETAILS
Mariah Carey
Thursday, March 21
SHOWTIME: 8 PM, DOORS OPEN: 7 PM
Tickets are $140/$160/$210
“With You”, “We Belong Together” and “Fantasy”.
TICKET INFORMATION:
Tickets are on sale at www.ticketmaster.ca or by calling toll free 1-877-599-RAMA (7262) and online at www.casinorama.com and in person at the Casino Rama Resort Box Office. Ticket prices are inclusive of taxes and exclude any applicable service fees. Ticketmaster is the only authorized seller of Casino Rama Resort concert tickets.
PER SHOW TICKET LIMIT: Ticket limit is 6 per customer per show. Please adhere to published ticket limits. Orders exceeding the ticket limit may be cancelled without notice by Ticketmaster at its discretion. This includes duplicate orders having the same billing address or credit card.
Patrons must be nineteen (19) years of age or older with government issued photo identification; those twenty-one (21) years of age or younger must also have a secondary piece of name identification. Those who have been trespassed and/or self-excluded from Casino Rama Resort or any Ontario gaming property and/or fail to meet Casino Rama Resort’s conditions of entry may not visit, participate in promotions and/or redeem offers.
ABOUT:
Mariah Carey: Mariah Carey is the best-selling female artist of all time with more than 200 million albums sold to date and 18 Billboard Hot 100 #1 singles (17 self-penned), more than any solo artist in history. Mariah is a singer/song­writer/producer recognized with multiple Grammy Awards, numerous American Music Awards, Billboard's "Artist of the Decade" Award, the World Music Award for "World's Best Selling Female Artist of the Millennium," and BMI's "Icon Award" for her outstanding achievements in songwriting, to name a few – with her distinct five-octave vocal range, prolific songwriting, and producing talent, Mariah is truly the template of the modern pop performance. Mariah's ongoing impact has transcended the music industry to leave an indelible imprint upon the world at large. She made her entry into the world of independent film with her landmark performance in "WiseGirls" starring alongside Academy Award winner Mira Sorvino and Melora Walters. In 2009, Mariah was recognized with the Breakthrough Performance Award at the Palm Spring International Film Festival for her critically acclaimed role in Lee Daniels' "Precious." Mariah went on to appear in Daniels' stellar ensemble piece "The Butler" (2013). A Congressional Award recipient, Mariah has generously donated her time and energy to a range of philanthropic causes near to her heart including Save the Music, the Make-A-Wish Foundation, World Hunger Relief, and the Elton John AIDS Foundation, among many others. A tremendous supporter of children's charities, both domestic and international, Mariah founded Camp Mariah in partnership with the Fresh Air Fund, a retreat for inner city children to explore career development. Mariah is represented by Roc Nation, UTA and Imprint PR. www.mariahcarey.com
Casino Rama Resort: Casino Rama Resort is Ontario's only First Nations resort casino and has earned a reputation for presenting exclusive world-class sporting, entertainment & television events. The Casino offers a complete entertainment experience with over 2,500 slot machines, more than 100 gaming tables, 8 unique restaurants, a world-class 5,000 seat Entertainment Centre, and a 300-room all-suite, full-service hotel, featuring spa and health club facilities. Through the Casino Rama Cares program we are dedicated to continuing our rich history of community support by being an outstanding corporate neighbour; providing year-round assistance through a combination of charitable giving and employee volunteerism. Casino Rama Resort is operated by Gateway Casinos & Entertainment Ltd.
-30-
Posted by Jim Fox at 6:36 PM