Get ready for a big dose of “pure Canadiana” at a dinner show in Niagara Falls that’s been given a makeover in time for Canada Day.
Oh Canada Eh? marks its 25th anniversary as an interactive theatre experience that celebrates the Great White North, said publicist Courtney De Caire.
“The songs, actors, production, rustic log cabin theatre – even the structure of the show itself – are pure Canadiana,” she added.
Featuring music from post Second World War to modern pop, Oh Canada Eh? tells a story about our culture and psyche and highlights the country’s special sense of humour.
This includes singing Mounties, lumberjacks, Anne of Green Gables and a hockey player paying tribute to about 50 songs by 30 Canadian recording artists.
With some 6,000 performances under its belt and entertaining 1.2-million people, Canadiana Productions Inc. calls this season a “showstopper.” 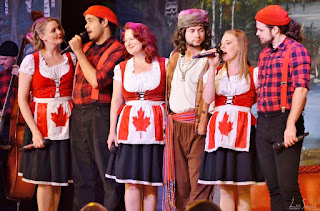 “We have come a long way from our humble beginnings,” said company president Jim Cooper.
New material highlights “more recent” artists such as Drake, Justin Bieber and Shawn Mendes along with the iconic Paul Anka, Anne Murray, Bryan Adams and Celine Dion.
The show runs through Oct. 26 at the Log Cabin Theatre (8585 Lundy’s Lane).
It’s followed by a season of musical productions such as murder mystery events, Rocky Horror Show and fundraisers. ohcanadaeh.com; 1-800-467-2071

It’s Alive!
Movies, monsters, mad science and Metallica’s Kirk Hammett come together for a “jaw-dropping exhibition” at the Royal Ontario Museum (100 Queen’s Park) in Toronto.
It’s Alive! Classic Horror and Sci-Fi Art is from the Hammett collection with “coveted cinema art and prized memorabilia.”
Opening July 13 and running through Jan. 5, this is a “trove of rare artwork and collectible objects” amassed over decades by the consummate collector.
There are more than 100 pieces from 20th-century cinema ranging from The Cabinet of Dr. Caligari (1921) to Alien (1979), organized by the Peabody Essex Museum, Salem, Mass. and sponsored by Cosmo Music.
“Acting as a mirror for societal fears, these films and the accompanying artwork reflect the collective cultural anxieties of the time,” said Josh Basseches, ROM director and ceo.
Rare works include the only surviving copy of the 1931 Frankenstein poster, movie costumes with life-size mannequins and Hammett’s electric guitars.
“Some of the posters are riveting – they can provoke, excite and enthrall,” said ROM curator Arlene Gehmacher.
Collecting horror might be called an obsession while others say “it’s just plain insanity,” Hammett said.
He will appear at a ROM Speaks event on July 23. rom.on.ca; (416) 586-8000

Lakeside home tour
The annual Lakeside Home Tour on Puslinch Lake (yes, that’s where pop singer Justin Bieber bought a home) happens next Saturday (June 22) from 10 a.m. to 4 p.m.
“It’s a beautiful way to see the lake and visit five homes,” said David Mitten of the Puslinch Lake Conservation Association.
The tour by pontoon boats, leaving the Old Marina Restaurant and McCormick Point (Concession #1), takes about 2-1/2 hours.
They have featured some 50 homes since 2005 and there’s also an option to drive.
The fundraiser helps with work to improve the environmental restoration of the small kettle lake.
“Visitors are surprised that this jewel in a Muskoka-like setting is just off the 401 east of Cambridge,” said the association’s Donna O’Krafka.
Tickets cost $35 and a barbecue lunch is available. myplca.com