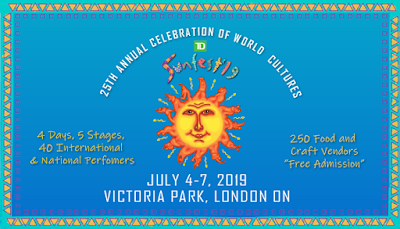 Find your summer vibe – hot dancing shoes and cool Sunfest Cerveza beer are a must! – during the landmark 25th edition of Canada’s Premier Celebration of World Cultures.  Voted one of the best overseas music festivals by the UK’s prestigious Songlines Magazine, as well as a TOP 100 event by Festivals & Events Ontario, TD Sunfest'19 is ready to transfigure London’s beautiful Victoria Park into a culturally diverse jewel where, for four days, 40 outstanding world music & jazz groups from all corners of the planet – Brazil to Reunion Island – will entertain on five stages.

TD Sunfest’s 2019 international headliners range from Middle Eastern sensations 47Soul (Palestine/Jordan/UK) to Peru’s ‘Cultural Ambassador’ Lucho Quequezana, Spain’s Grammy-winning Marinah and Chile’s 14-piece Newen Afrobeat orchestra.  Premier Canadian acts include Quebec’s AfrotroniX, The Brooks and Le Vent du Nord.  And with 250 exhibitors, this beloved FREE-Admission attraction (more than 225,000 happy visitors served each summer) will whet festivalgoers’ appetites for scrumptious global cuisine and unique crafts & visual art.
“TD Sunfest is my favorite festival of the year [and] easily the city’s most popular festival… [which has become] a destination for world-class performers…The beauty of TD Sunfest is that the music is often a mash-up of genres that will especially satisfy the curiosity of anyone looking to enjoy unusual sounds played on equally unusual instruments.  It also has the largest and most unusual collection of arts and crafts and food vendors of any London festival.  The best part, for me, is that TD Sunfest draws an audience – often entire families – from across London’s cultural mosaic to one location, an opportunity for barriers to fall and understanding to rise.  If you’ve never been, you’re not just missing out on the music, you’re missing out on meeting your newest neighbour.” – Joe Belanger, The London Free Press, Sat. June 23/18
DoubleTree by Hilton London is the official hotel for TD Sunfest.  A 4-star facility, it is located only three blocks from the festival site. Also close by are the Delta London Armouries Hotel, the Marriott Inn, the Holiday Inn and The Park Hotel.