Canadians can save big on air travel 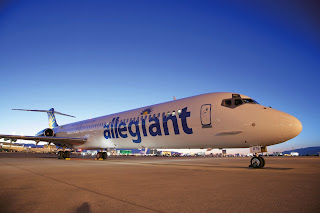 September 9, 2013 (Las Vegas, NV) -- The secret is out: Canadians can save big money on air travel by flying out of the closest US airport with Allegiant Air.

Offering prices up to 72% less than leading Canadian airline prices, Allegiant is the choice airline for Canadians wishing to spend their hard-earned dollars at their destination, rather than on transportation. Allegiant flies to sunny Hawaii, Las Vegas and several California and Florida destinations.

"Travelers who shop around will find substantial savings when flying with Allegiant, as well as great deals on hotels, rental cars and attractions."


To prove this, a comparison was made based on cost for a family of four traveling from several Canadian cities (Toronto, Montreal, Vancouver, Winnipeg, Fredericton and more) on Allegiant versus a leading Canadian carrier. When factoring in the additional expenses involved in driving to cross-border airports, maximum savings ranged from $608.74 to $2,191.64 less than the competition*.

The full comparisons can be found by, downloading http://e-newsletter.org/allegiant/AA_13_11_DTC_July.pdf. To find out more about Allegiant and to see what savings can be had for your own specific travel itinerary, visit www.allegiant.com.

* Note: as airline pricing is dynamic, often changing daily, actual savings will vary based upon date of travel and other factors, such as the number of bags carried or seat selection fees.
Canadians can only take advantage of these nonstop air travel and vacation savings by booking direct through www.allegiant.com.

Allegiant, Travel is our deal.
Las Vegas-based Allegiant Travel Company (NASDAQ: ALGT) is focused on linking travelers in small cities to world-class leisure destinations. The company operates a low-cost, high-efficiency, all-jet passenger airline through its subsidiary, Allegiant Air, while also offering other travel-related products such as hotel rooms, rental cars, and attraction tickets. All can be purchased through the company website, allegiant.com. The company has been named one of America�s 100 Best Small Companies by Forbes Magazine for four consecutive years.
Posted by Jim Fox at 11:01 AM