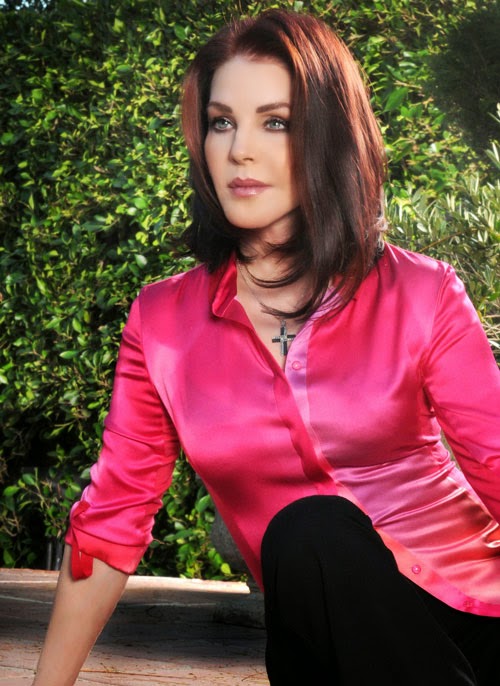 Joining Priscilla at the Festival will be her co-author, Christopher Ameruoso, as they promote their new book, Shades of Elvis.

Shades of Elvis is a new tribute book  showcasing Ameruoso’s photographs of a broad array of celebrities wearing Elvis’ iconic sunglasses. Priscilla worked closely with Ameruoso on the development of the book, and contributed the foreward.

Collingwood Elvis Festival General Manager Rosemarie O’Brien, together with Board Chair, Peter DeVries, made the Festival announcement during a press conference held at Collingwood Town Hall on Wednesday April 9.


“I am thrilled to be here today to announce that this is the year,” said DeVries. “Priscilla will arrive at the Festival on Thursday July 24th and will attend a number of events during the 20th anniversary celebrations” announced O’Brien.

Priscilla Presley was with Elvis for over ten years and married to him from 1967 to 1973. An actress, producer, author and businesswoman, Priscilla was instrumental in turning Graceland® into a world-renowned attraction and Elvis Presley Enterprises into a highly successful entertainment, licensing and merchandising organization. As an actress, Priscilla Presley is known for her memorable roles in Dallas and The Naked Gun movies, as well as her acclaimed London stage performance in the pantomime production of Snow White and the Seven Dwarfs.

Ameruoso is an acclaimed photographer well known for his work photographing stars and their pets.
“As Mayor, and on behalf of Council, I am thrilled to be able to welcome Priscilla Presley and Christopher Ameruoso to our community for the 20th anniversary of the Collingwood Elvis Festival,” said Collingwood Mayor Sandra Cooper.

“The Festival Board is hard at work planning some great events for Priscilla and Christopher to meet the many fans of Elvis, who will attend the Festival this July.”

Priscilla and Ameruoso will appear at several events during their time in Collingwood. Additional details on these events will follow as the Festival approaches.
“It is truly a special honour for our Town and the Collingwood Elvis Festival to welcome Ms. Presley. Our fans will be treated to a very unique opportunity as we celebrate this milestone anniversary of 20 years.

This will be a memorable and historical event in our Festival’s history,” said O’Brien.
“I look forward to introducing Priscilla and Christopher to Collingwood, and to all the festival attendees, at the opening ceremonies on Friday,” said Mayor Cooper. “We are so pleased that they have chosen to join us for this significant anniversary to promote their new book, Shades of Elvis.”

“All of us at Elvis Presley’s Graceland are proud of the continued success of the Collingwood Elvis Festival which truly celebrates the life and legacy of Elvis Presley, much like Elvis Week here in Memphis. The success and longevity of this festival are tied to the tremendous star power of Elvis Presley and we feel certain that there are another 20 successful years and more ahead for this amazing festival,” stated Jack Soden, CEO of Elvis Presley Enterprises, Inc.

The Collingwood Elvis Festival is presented in partnership with the Town of Collingwood, Collingwood Downtown, Collingwood Chamber of Commerce, Cranberry Resort/Living Water Resort, the Government of Ontario, OLG and Blue Mountain Resort.

About Elvis Presley Enterprises, Inc.
Elvis Presley Enterprises, Inc. (EPE), based in Memphis, manages the operations of Elvis Presley’s Graceland, its related exhibits and attractions, including the Heartbreak Hotel, as well as the Graceland archives, featuring thousands of artifacts from Elvis’ home and career. EPE also produces and licenses Elvis themed live events, tours and attractions worldwide. Graceland is music’s most important and beloved landmark, with hundreds of thousands of fans from around the world visiting the famous home each year. In 2013, Graceland was voted the #1 Iconic American attraction by USA Today and 10Best.com readers. For more information on EPE and Graceland, visit www.graceland.com.