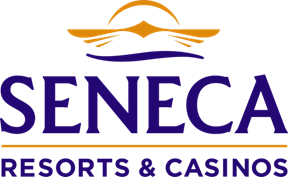 New logos, new tagline, “It’s Time to Play,” rolling out throughout
advertising campaign with an emphasis on Seneca Resorts & Casinos’
integrated experience for entertainment and excitement


NIAGARA FALLS, N.Y. – Seneca Gaming Corporation will head into the end of summer with a bold new brand positioning to complement the company’s vision and promise to be the Northeast Region’s premier entertainment destination. Defining entertainment, action and excitement in Western New York, Seneca Gaming Corporation unveiled a new, forward-looking brand identity that goes beyond the casino floor and hotel towers to reach gamers and entertainment seekers throughout the region.


“This is so much more than a logo change. Seneca Resorts & Casinos’ new communication strategy, brand look, voice and personality are perfectly aligned with our proven business strategy and strong local partnerships to create a best-in-class experience for the millions of visitors to the Western New York region every year,” stated Doni Taube, senior vice president of marketing, Seneca Gaming Corporation.

“When you are at any of the Seneca Resorts & Casinos locations, you will find everything you need to come out and play, no matter how you define it – from gaming action, to a round of golf, to a day at the spa, to dinner and a show, to nightlife, to shopping at an array of boutiques and malls, to a variety of local sights and attractions. It truly is an integrated experience that encompasses all aspects of a getaway and offers something for everyone and every occasion, no matter if for an hour or for a weekend.”


“Seneca has strong brand recognition and has built a truly incredible entertainment destination for more than a decade. We’re thrilled with the evolution of our brand and expanding our reach to more guests,” said Cathy Walker, president and CEO, Seneca Gaming Corporation. “Equally important is that our new brand reflects who we are, the markets we serve and the experience that differentiates us from everyone else. And we believe that Seneca Resorts & Casinos continues to deliver and redefine entertainment, excitement and excellence in Western New York.”

Seneca Gaming Corporation first introduced casino gaming in Western New York on December 31, 2002 with the opening of Seneca Niagara Casino in Niagara Falls, which, at the time, offered slots, table games, a buffet and a stage for live entertainment on the gaming floor. The property expanded throughout the years to offer a AAA Four Diamond Award–winning hotel with 604 rooms, nine dining outlets, nine retail outlets, a full-service Spa & Salon, indoor swimming pool and workout facility, and the 2,400-seat Seneca Niagara Events Center and 440-seat Bear’s Den Showroom that are home to the world’s finest entertainers every weekend. And most recently, the property unveiled a completely renovated main gaming floor with the addition of STIR, a new high-end feature bar and lounge. The property is located less than a 10-minute walk away from the breathtaking Niagara Falls, the core of a Niagara Region that offers historic wine trails, endless shopping, numerous attractions and much more.

Seneca Gaming Corporation’s additional properties have evolved as well. Seneca Allegany Resort & Casino in Salamanca initially began 10 years ago as a temporary green steel structure with slots, table games and a buffet. In 2007, it opened a permanent gaming floor, a 212-room hotel, multiple restaurants, the Spa & Salon, an outdoor hot tub and an indoor pool. The following year, the 2,400-seat Seneca Allegany Events Center opened and now serves as a venue for top entertainment as well as special events and conferences. Two years later, the TEN Store joined the 24-hour Logo Shop as a retail outlet. And in late 2012, the AAA Four Diamond Award–winning hotel tower expanded, nearly doubling room capacity from 212 to 413 rooms. Located right at Exit 20 of the Interstate 86, Seneca Allegany Resort & Casino is just minutes away from a variety of outdoor activities, such as hiking, mountain climbing, skiing and golf.

Seneca Buffalo Creek Casino expanded its space twice in downtown Buffalo between 2007 and 2010, starting with 135 slots and increasing to 244 and then 457. One year ago, a permanent 67,000 square-foot property opened, offering more than 800 slots, 20 table games and three dining locations. The stunning property recently received an award in conjunction with a local business publication as the “Best New Construction” for 2013. Seneca Buffalo Creek Casino is located in the heart of downtown Buffalo and in the city’s burgeoning Cobblestone District, making the casino an entertainment option for those looking to enjoy nearby professional sports, theater, concerts, festivals, the Lake Erie waterfront and more.

Finally, in 2010, Seneca Hickory Stick Golf opened in Lewiston, N.Y. The 18-hole, par-72 public course, designed by world-renowned golf course architect Robert Trent Jones II, has since earned multiple industry awards, including No. 6 Best New Course in America for 2010 and No. 11 Best Public Golf Course in New York State by Golf magazine and No. 25 among Best Casino Courses in the U.S. by Golfweek magazine.


The new names, logos and tagline were created by the Seneca Resorts & Casinos’ marketing unit and The Martin Group, a full-service integrated marketing communications agency based in Buffalo.


Since opening Seneca Niagara Casino in 2002, Seneca Gaming Corporation has grown into one of the largest private sector employers in Western New York, with 4,000 employees at its three locations. The company operates world-class facilities offering more than 6,400 slot machines, 140 table games, 1,000 hotel rooms, a championship golf course and other related amenities. Seneca Gaming Corporation was recently selected as one of Western New York’s “Healthiest Employers” and was chosen last year as one of the region’s “Most Admired Companies” by Buffalo Business First. For more information, visit www.SenecaCasinos.com.