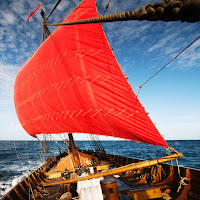 Toronto, ON – A courageous crew of sailors from around the world set sail aboard the world’s largest Viking ship.

Departing from her homeport in Haugesund, Norway, on Sunday, April 24, Draken Harald Hårfagre and her crew committed to the daring journey to cross the North Atlantic for her Expedition America.

The great ship will be joining the fleet of international tall ships in Toronto for the Redpath Waterfront Festival presented by PortsToronto from July 1 to 3.

The Expedition America project curator, Sigur Aase, wanted Draken Harald Hårfagre to follow in the wake of one of the most challenging Viking explorations – the Viking discovery of the New World.

The dragon’s head is traditionally not mounted until departure for long journeys to defend the ship and her crew from sea monsters, bad weather, evil creatures and unexpected raids. The ship’s mythological head was revealed in the ceremony, and the great adventure of sailing the historical route was wished “Fair winds and following seas.”

"Even though she is a great sailing ship, no one can predict the weather conditions along the way and the crew will face a real challenge," states Björn Ahlander, captain of Draken Harald Hårfagre. "It’s hard to say which stretch will be the toughest before we’ve set sail, but the waters of Cape Farewell by the coast of Greenland are among the most dangerous waters in the world. It’s extremely windswept and there will probably be a lot of ice."

Draken is crewed by 32 sailors from Norway, Sweden, USA, Canada (Jeff Lievre, Vancouver Island), Estonia, Russia, Spain, France and the UK, all of who were chosen from over 4,000 male and female applicants worldwide. Draken Harald Hårfagre does not provide any shelter for the crew other than a tent where the rotating crew sleep, 16 at a time, four hours work and four hours sleep. The crew will take on the challenge of crossing the North Atlantic Ocean, taking the same route the original Vikings travelled 1,000 years ago from Norway to Iceland, Greenland, Canada and finally the USA.

"It is a challenge to tame the Dragon, which makes reliable seamanship extremely important for the expedition," adds Ahlander. "The work onboard is heavy, wet and cold, therefore it demands a great physical and mental condition. There will be no privacy for the crew, they will be exposed to rain and cold weather with only short breaks to sleep."

ADDITIONAL REDPATH WATERFRONT FESTIVAL FLEET
El GALEóN
Step back in time aboard El Galeón, a breathtaking 1:1 scale reconstruction of a 16th century Spanish galleon that was part of Spain’s West Indies fleet. Built in Spain by the Nao Victoria Foundation to be a unique vessel where tradition and modernity meet and represent the Spanish culture, El Galeón is a replica of the Spanish galleons that linked Asia, America and Spain for three centuries. El Galeón will participate in the TALL SHIPS CHALLENGE® Great Lakes 2016 series, and the Festival will be the first port to launch the series. With more than 3,400 square feet, the ship has six decks to explore, 164 ft long and has three masts and seven sails.

BE INSPIRED BY THE ROYAL CANADIAN NAVY
Visitors will have the opportunity to tour the decks of two of the Navy’s 55-metre coastal defence vessels, Her Majesty's Canadian Ships (HMCS) Kingston and HMCS Goose Bay, throughout the weekend. Early risers can come to Harbour Square Park and join the Navy for a fun and motivating 5km run, July 1 and 2 at 8am. Join the Royal Canadian Navy at Toronto’s HMCS York! They are actively recruiting for a variety of exciting careers and opportunities.

2016 Redpath Waterfront Festival partners include Redpath Sugar, PortsToronto, The Waterfront BIA, and Waterfront Toronto, among others.

The Redpath Waterfront Festival is an annual summer event providing on-land and on-water programming for people of all ages and interests, with the goal of promoting Toronto locally and internationally as a premiere waterfront destination. With music, food, nautical programs and entertainment, the festival offers something for everyone to enjoy. Every three years, the event welcomes majestic TALL SHIPS® to Toronto. www.TOwaterfrontfest.com