The voice of Toronto's waterfront: The Singing Ambassadors inform and perform until Sept. 5

Toronto, Ontario – June 21, 2016 – The triple award-winning Singing Ambassadors presented by The Waterfront BIA return for their fifth year on Toronto’s Waterfront. Eight lively ambassadors will be performing impromptu a cappella renditions of classic summer hits and offering assistance, directions and recommendations to visitors on Thursdays, Fridays, Saturdays, Sundays and Mondays, from 11am to 6pm until September 5. Visit www.waterfrontbia.com for more information. 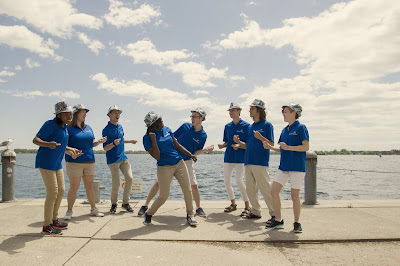 “The Singing Ambassadors inform and perform,” states Carol Jolly, Executive Director, The Waterfront BIA. “They not only share information and help direct people to the many amazing places on Toronto’s Waterfront, but their a cappella performances enhance the visitor experience throughout the summer.”

The 2016 Singing Ambassadors are Asha James, Dan Lord, Erin Horan, Ewura-Abena Bourne, Hugh Ritchie, Jackson Smylie, Reuven Grajner and Stephanie Hotchkiss. They are split into two quartets that will perform ten a cappella summertime favourites in key locations and busy daytime spots along the Waterfront. Each song has been arranged as full and 1.5 minute songs by internationally-published com­poser, arranger and per­former Aaron Jensen.


Get ready to groove and move with the Singing Ambassadors this summer. Their song list includes: Happy by Pharrell Williams; Dancing in the Street by Martha and The Vandellas; Sh Boom Sh Boom by The Chords; It’s All Right by The Impressions; Good Day Sunshine by The Beatles; I Can See Clearly Now by Johnny Nash; I Get Around by the Beach Boys; Under the Boardwalk by The Drifters; Cecilia by Simon and Garfunkel and Jump in the Line by Harry Belafonte.

“This is my second year as a Singing Ambassador and I have learned so much about Toronto’s Waterfront,” states Reuven Grajner. “I love seeing the smiles on people’s faces when we burst into song!”

Wearing The Waterfront BIA branded polo shirts, windbreakers, back packs, and festive fedoras, the Singing Ambassadors will be easy to spot as they distribute discount cards and information on key local activities to keep Torontonians and tourists well-informed of all that the Waterfront has to offer. Throughout the summer, they visit members daily to gain updates, perform, and take photos. In addition, they ride the sponsored City Sightseeing Toronto double-decker tour buses to explore the city’s top attractions and spread the word about the Waterfront. Special appearances are also made at member, resident and neighbouring events including the Waterfront Artisan Market, the Redpath Waterfront Festival, Sail-in Cinema, Union Station, Jack Layton Ferry Terminal, Ripley's Aquarium, Centreville, and Billy Bishop Toronto City Airport to name a few.

New this year is The Waterfront BIA’s Snap & Share Contest. Snap a photo of the Singing Ambassadors and share it on Facebook for your chance to WIN 1-of-9 pairs of tickets to see LUZIA by Cirque du Soleil! Posts must include #SingingAmbassadors and #‎LUZIA to qualify. Beginning Monday, July 11, nine weekly winners will be announced on Facebook.

The Singing Ambassadors help to make the Toronto Waterfront a welcoming destination and have a positive impact on the newly revitalized pedestrian-friendly neighbourhood. The program is made possible with assistance from Canada Summer Jobs.

About The Waterfront BIA:
The Waterfront Business Improvement Area (WBIA), established in 2004, is the voice of the business community. Toronto’s WBIA is a community-driven organization dedicated to promoting and enhancing the economic and cultural vitality of the Waterfront area. The WBIA welcomes 17 million visitors annually with a service area population of 57,121 and growing rapidly. 68% of the area's residents are under the age of 45, and the average household income is $118,924. Unlike most Toronto BIAs, the WBIA is both a full-service residential area and a tourist destination. The Waterfront ranks second in every visitor category – domestic and international; pleasure and business, first-time and repeat. Through marketing and promotion, special events, streetscape enhancement, strategic planning and advocacy initiatives, the WBIA continues to secure its position as one of Toronto’s premier destinations. Annual programs include Doors/Gangways Open, Waterfront Artisan Market, Redpath Waterfront Festival, Waterfront Singing Ambassadors and Winterfest on Toronto's Waterfront. The Waterfront BIA has been the proud recipient of the Toronto Association of Business Improvement Areas (TABIA) Awards in 2011, 2013, 2014 and 2015, as well as the 2015 Downtown Merit Award from the International Downtown Association (IDA) and the Award of Distinction from the 2016 BIA National Conference Awards. For more information, visit www.waterfrontbia.com.