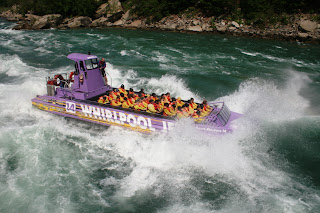 NIAGARA-ON-THE-LAKE, Ont. – Whirlpool Jet Boat Tours’ reputation as one of Niagara’s premier attractions is building momentum in the overseas tourism market, drawing a growing number of international travellers to experience the one-of-a-kind adventure ride on the Niagara River.
The Niagara-on-the-Lake tour boat operator owes a large part of its success over the past 20 seasons to its emphasis on forging relationships with international travel companies and investing in overseas marketing strategies, says Whirlpool Jet Boat Tours president John Kinney.


“We attract a steady ridership from our home markets in Canada and the U.S., but our international visitors make up an extremely important share of our businesses each year as well,” Kinney says. “They’re drawn to Niagara by the same thing as our domestic passengers — the opportunity to safely experience a thrilling whitewater adventure that they can’t find anywhere else in the world.”
International riders — largely from Asia and Europe — have grown steadily over the past several years and now make up roughly 30% of the company’s passenger list. Whirlpool Jet Boat Tours has long been popular with travellers from Japan, but in recent years the company has been able to successfully target emerging tourism markets in China, India and Korea, which is now the company’s largest international market.
“Some people think that we take the winter off when we pull our boats out of the water at the end of October, but that’s far from the case,” Kinney says. “We’re extremely busy throughout the winter, ramping up our marketing efforts overseas at travel shows and putting together travel packages with international tour operators.”
In addition to producing marketing and promotional materials in several languages, Whirlpool Jet Boat Tours tries to ensure its international guests feel at by hiring multilingual staff and trip leaders whenever possible.
“People around the world are attracted to the Niagara Gorge because of its raw beauty and amazing power the river. Our goal is to help them soak up the experience and go home with memories that will last them a lifetime,” Kinney says.
Whirlpool Jet Boat Tours offers two different types of trips on its fleet of eight 54-passenger boats — wet and dry. Guests in open-topped jet boats are guaranteed to return to the dock soaking wet, doused with gallons of water while their boat pilot powers them through the rapids at high speed and expertly spins them through the chop in a complete 360-degree turn. Passengers in the covered Jet Dome get the same thrill ride, minus the splash, and return as dry as they were at the outset.

About Whirlpool Jet Boat Tours:
Celebrating it’s 20th anniversary this year, Whirlpool Jet Boat Tours has been giving passengers a taste of adventure on the white water of the Niagara River since 1992. Passengers experience a thrilling and educational one-hour guided tour, where there can take in the awe-inspiring scenery of the Niagara Gorge, feel the rush of the Class 5 Devil’s Hole rapids and marvel at the power of the Niagara Whirlpool. Headquartered in Niagara-on-the-Lake, the tour company’s fleet of custom-built jet boats depart from three locations: Niagara-on-the-Lake, Niagara Falls, Ont. (shuttle bus from Whirlpool Aero Car check-in to Queenston dock) and Lewiston, N.Y. For more information, go to www.whirlpooljet.com.
-30-
The links below will also take you to some of Whirlpool Jet Boat Tours’ videos for international travellers.
Japanese:
http://www.youtube.com/watch?v=VLvLGw06P0Q&list=UUgtXwJz7aoWD6_v9eWi5hSw&index=1&feature=plpp_video