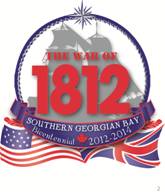 Lt. Miller Worsley of the British Royal Navy was in a tight situation and he knew it. From his position at the mouth of the Nottawasaga River looking out onto Georgian Bay, he could see the sails of three warships approaching. They were not flying the British Union Jack, but the Stars and Stripes of the infant republic to the south. It was August 13th, 1814 and Great Britain had been at war with the United States for two years.


From the narrow strip of land on which Worsley lay, the Nottawasaga River curved behind him running almost parallel to the lake shore for about four miles, a piece of waterfront, which to future generations would become a popular tourist destination.

But now it was war and Worley’s main concern was the schooner Nancy which sat anchored in the river behind him, her masts concealed by the trees. She was his to command along with 21 seamen of the Royal Navy, 23 Indians and 9 French Canadian Voyageurs. This was Nottawasaga Landing an important British supply post. It was guarded only by one crudely built blockhouse on the inland side of the river and was the only means of defence which stood between the Americans and the Nancy, if she was to be discovered.
The American ships Niagara, Tigress and Scorpion, under the command of Captain A. Sinclair had sailed to the mouth of the Nottawasaga River and dropped anchor. They believed the Nancy whom they were seeking, was still on route from Fort Michilimackinac. Perhaps the Nancy and her crew would escape the Americans after all……

Wasaga under Siege “A War of 1812 Experience” hosted by Nancy Island Historic Site and the Town of Wasaga Beach will feature authentic War of 1812 tactics, historical battles, marine assault landings, artillery, and much more. A professional public address announcer will narrate each battle event as a series of fictional and historical battle scenarios will be presented to the public over a three day period. 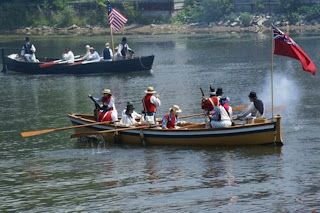 "The sandy beach and the modern attractions that surround it have overshadowed Wasaga Beaches rich history for such a long time, that only a small percentage of visitors and residents actually know that a War of 1812 battle was fought here. Wasaga under Siege “A War of 1812 Experience” is an annual large scale re-enactment that will help bring to live this important historical event in Wasaga Beaches’ history. Battles and activities will no longer be restricted to the Historic Site of Nancy Island as all battle events will take place off the island in various beach park locations throughout Wasaga Beach. The battles taking place off Nancy Island will bring more awareness of our rich history to our visitors and residents as well as bringing more exposure and visitation to Nancy Island Historic Site itself.” - Town of Wasaga Beach
Visit www.wasagaundersiege1812.com for more event information.

Looking for Volunteers – Aug 16th- 19th- Nancy Island Historic Site
We are also looking for community volunteers to help out with admissions, refreshment booth, shuttle service, parking and other positions. Anyone interested in helping out at the event will receive an event T-shirt, event souvenir, endless bottles of water and meals depending on the day and time you volunteer. Volunteers will also receive 2 free admissions for the weekend for friends and family. Contact:
Marilyn Beecroft at: mjbcroft@gmail.com .

The Peak 95.1 FM & The Beach 97.7 FM
The Peak FM and The Beach FM have also come on board as radio sponsors and will be providing great pre-promotion of the event in the form of radio commercials, talk show appearances, free give-ways and live on-site broadcasting during the event. We encourage everyone to tune into the Peak or the Beach FM when you are in or coming into the Wasaga Beach area. For more information please visit:
www.thepeakfm.com www.977thebeach.ca

Service Clubs Support Local Heritage & Community Wellness
Wasaga under Siege would like to recognize the generous ongoing support of two community service clubs who have been contributing to the success of Wasaga under Siege since its debut back in 2003. The Lioness Club and Kinette Club of Wasaga Beach have been great community supporters who recognize the importance of educating and promoting Wasaga Beach’s rich heritage. Their ongoing support for the past 10 years has contributed directly to the quality and success of Wasaga under Siege and community wellness throughout the town.

August 23, 1812: Young Ensign Jonathan Westlake sails on the schooner Chippewa toward Fort Erie at the mouth of the mighty Niagara River, escorting Mary Collins for a visit home to meet his parents. But Westlake’s leave is suddenly cancelled and Mary must be left behind. British General Isaac Brock orders him to Virginia to rescue a slave named Alexander the Great, a former sergeant in the King’s Army, who will lead the newly formed Company of Coloured Men. When Westlake falls in love with a beautiful American woman, he begins a quest for his own understanding of freedom while leading his party against pursing slave catchers, hostile natives, and even the U.S. Army. In a race for their lives to escape the hunters, he searches for the location of three secret abolitionists, conductors on the new “underground railroad.” Then, on the cool morning of October 13, 1812, the hunted become the hunters, as all the opposing forces collide in the legendary Battle of Queenston Heights. And Westlake learns that the price of freedom is higher than he ever imagined.

The Silent Canoe by J. Philip
The early years of Upper Canada are told through the eyes of Isaac Devins, a young American who immigrated to Upper Canada in 1793. The characters of history come alive in a tale of joy and suffering, feast and famine, life and death. Isaac becomes the right-hand man to Governor John Graves Simcoe, a foreman who helps to build Yonge Street, a carpenter, fisherman and father. First he is exalted as a hero when he saves the small settlement of York from starvation, then scorned as he is tried and convicted of a crime for which he
Press Release – Wasaga under Siege 2012
Recipient of the 2006 Wasaga Beach Chamber of Commerce
Tourism Attraction of the Year Award
has no remorse. Retreating from life at York, Isaac finds solace as he paddles on the Humber, along with his closest friend, Fire Starter, the son of a Mississauga chief. As the War of 1812 approaches, Isaac does not feel compelled to help in the war effort, unlike his brothers, one of whom is killed at Queenston Heights. Will Isaac set aside his bitterness and fight when his country needs him the most?
Author J. Philip will be present during Wasaga Under Siege 2012 for questions and signing copies of her book. More information is available on www.thesilentcanoe.com
Nancy Island Grand Encampment Open to the Public
Friday, Aug 17th - 10:00am to 9:00pm Saturday, Aug 18th - 10:00am to 9:00pm Sunday, Aug 19th - 10:00am to 4:00pm
The Grand Encampment at Nancy Island Historic Site features over 300 re-enactors opening their living history encampments to the public along with 19th century merchants, musket and cannon demonstrations, period artisans & demonstrators, roaming entertainers, all day and much more.
Gunboats on the River
Friday, August 17th - 7:45pm Saturday, August 18th - 2:45pm & 7:45pm Sunday, August 19th - 1:00pm
American gunboats have been dispatched up the river to survey defences of the British. British gunboats and shore batteries await the Americans as the roar of cannons and muskets thunder across the water. Battles take place on the Nottawasaga River, between the Main St. Bridge and Nancy Island Historic Site
Skirmish in the Woods!
Friday, August 17th - 7:00pm - Fictional Battle
American scouting and foraging parties have been sent ashore for firewood and reconnaissance in search of any signs of British forces and the Schooner Nancy hidden up the Nottawasaga River. British pickets have already alerted Lt. Worsley of the American presence and re-enforcements have been sent out to stop the American advance and hopefully discovering the Nancy.
Press Release – Wasaga under Siege 2012
Recipient of the 2006 Wasaga Beach Chamber of Commerce
Tourism Attraction of the Year Award
The Americans have Landed!
Saturday, August 18th - 2:00pm - Fictional Battle
The Americans unprepared for the previous evening battle have re-grouped and landed with force as they come closer and closer to detecting H.M.S. Nancy. Once again Lt. Worsley and his small force will try and hold off the Americans and avoid detection. Will they succeed?

Defending H.M.S. Nancy!
Saturday, August 18th - 7:00pm - Historical Battle
Having successfully staled the American advance hours earlier and believing that the Nancy's hiding place is still safe, Lt. Worsley was unaware that the tall masts of his ship had been spotted by American troops during the day battle and a full scale American assault was being planned to capture his ship. Lt. Worsley did all he could to defend her from the American onslaught. Badly outnumbered the Nancy was destroyed in battle, though its defenders escaped upstream to fight another day.

Avenging the Nancy!
Sunday, August 19th - 2:00pm - Fictional
The Americans having obtained their objective in destroying the Nancy, have left behind two small ships and crew to guard the mouth of the Nottawasaga River. Lt. Worsley having re-supplied rowboats with goods and ammunition from an upstream depot; must first clear the way for his rowboats to safely pass and re-supply besieged Fort Michilimackinac. Forcing the Americans to once again land and fight, Lt. Worsley will have the final taste of victory as British cold steel and Native support save the day!

Be sure to visit the new Wasaga Beach Welcome Centre at the
entrance to Nancy Island Historic Site. This building replaced the
aging blockhouse and provides a facility that functions not only
as an orientation to Nancy Island and the War of 1812, but also as
a Visitor Centre to interpret the rich natural and cultural resources
of Wasaga Beach Provincial Park.

The exhibit gallery is a stepping-off point from which visitors will develop
a desire to further explore and learn about the Park and Historic Site.
This facility provides an orientation to a unique Provincial Park which is
located completely within a Town, where tourism is recognized
as its major industry. The Welcome Centre’s completion coincides with the Bicentennial
of the War of 1812 with new interpretive displays that highlight the Bicentennial
celebrations and the 200 years of peace between Canada and United States. The
little-known story of the HMS Nancy and her crew played a vital role in
establishing Canada as a nation, and therefore is a vital part of our Canadian heritage.

The new building also allows the site to better host and support major special events
such as Wasaga under Siege (a War of 1812 battle re-enactment) and a planned
Georgian Bay Tall Ship Rendezvous in 2013.

Nancy Island is recognized nationally as a significant heritage site.
A Government of Canada monument located at the entrance to Nancy Island recognizes
the area as the site of a significant naval engagement during the War of 1812.
Wasaga Beach Provincial Park houses the charred hull and artifacts of the HMS Nancy
from this pivotal moment in Canadian history. The borders of Canada today are a direct
result of the valiant struggles of the Nancy and her crew.
Posted by Jim Fox at 12:36 PM