RAMA, ON (Thursday, May 15, 2014) – Casino Rama is pleased to announce the following two concerts that will start the release of our much anticipated Fall concert line-up: 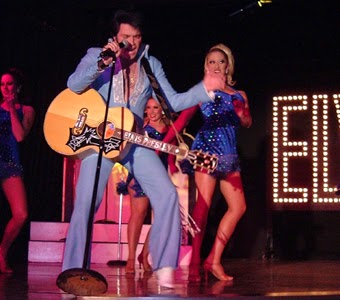 Cawley has been ranked the #1 Elvis impersonator in the USA by a committee of Elvis fan club presidents. His amazing voice allows the audience the chance to relive the excitement of having seen "The King" in person.

For the first time, this tour celebrates 1969 – the extraordinary year in which Fogerty wrote and produced THREE seminal albums with Creedence Clearwater Revival: BAYOU COUNTRY, GREEN RIVER, and WILLY AND THE POOR BOYS.

Beginning with PROUD MARY, which quickly established him as an elite singer/songwriter, he wrote and produced an enormous volume of treasured recordings in a small amount of time that propelled Creedence Clearwater Revival to become the number one group in the world.

The legacy of 1969 lives on with BORN ON THE BAYOU, GREEN RIVER, BAD MOON RISING, DOWN ON THE CORNER, and capped off with a song for the ages, FORTUNATE SON. All of this musical output occurred while the world’s cultural and political landscape was in upheaval. 1969 was an extraordinary time. The show will be centered around this year, but also include his complete catalog of hits.

Exclusive advanced in-person ticket purchase for Players Passport™ Club Members begins Thursday, May 22 at 12 noon only at the Casino Rama Box Office. Advanced online ticket purchase for Facebook Fans & Club Members begins on Thursday, May 22 at 2pm at www.ticketmaster.ca or by calling toll free 1-877-599-RAMA (7262). A special code is required for the advanced online purchase period which can be found on the Casino Rama Resort Facebook page.

Tickets go on-sale to the general public on Friday, May 23 at 12 noon and will be available in-person at the Casino Rama Box Office, at all TicketMaster locations, by calling toll free 1-877-599-RAMA (7262) and online at www.casinorama.com. Ticket prices do not include applicable taxes or service charges.

PER SHOW TICKET LIMIT:  Ticket limit is eight (8) per customer per show.  Please adhere to published ticket limits.  Orders exceeding the ticket limit may be cancelled without notice by TicketMaster at its discretion.  This includes duplicate orders having the same billing address or credit card.

Patrons must be over 19 years of age with valid government issued photo identification and not self-excluded from any gaming facility in Ontario to attend concerts & events.