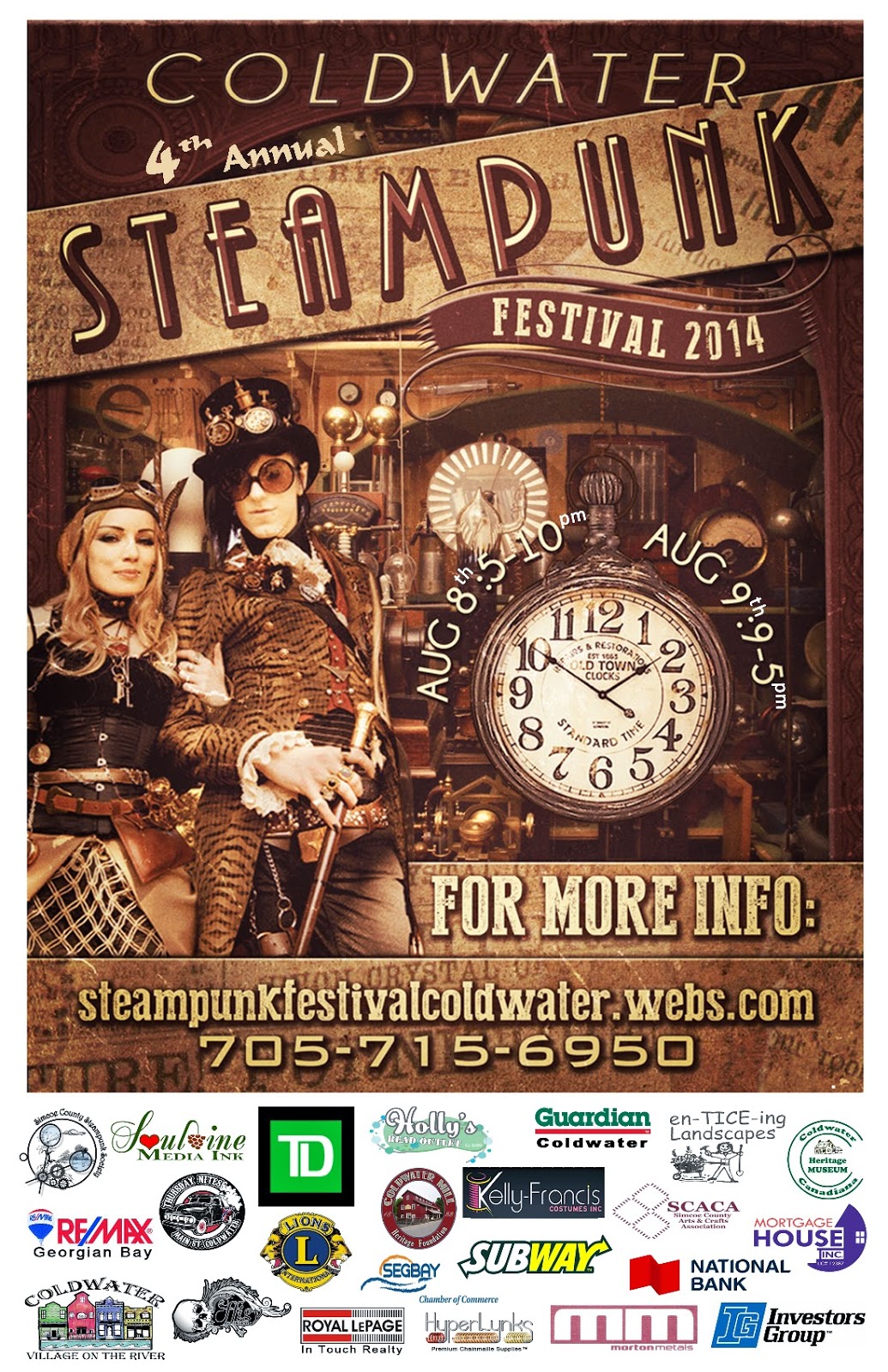 COLDWATER, Ontario -- Join us at the World Premiere of the robot "Hel" (Metropolis Robot Project), replicated from the 1927 German Expressionist Film METROPOLIS.

See it for the first time at the Steampunk Festival in Coldwater, Ontario opening on Friday evening, August 8th and continuing all day Saturday, August 9th.

On Saturday, the entire Village of Coldwater is participating in the event that has exploded with popularity and has social media buzzing as far away as Germany and the United States. This event in its 4th year, will transform you back in time to a late Victorian era "Steampunk Fantasy".

Join us Friday evening at 5:00 pm for the opening ceremonies featuring Canadian Author Karin Lowachee (The Gaslight Dogs).  Karin will be hosting a creative writing talk at the Coldwater Library.  At 6:15 The Unveiling of the Letter "C" by Orillia artist Marg Gurr, will be followed by a reception at the Ice Cream shop. At 6:00 pm meet Featured Artist Russell Warwick Zeid, from the Ontario Science Centre, exhibiting his “Steampunk Inventions” as R. Phinius Bodine, next door at the Coldwater Heritage Mill.   Mandi-Lee will be performing and singing on solo guitar, while Coldwater’s  “Libby Ives” performs pole acrobatics.

This year's festival has attracted the attention of a "Who's who" list of prop and costume makers from the Toronto film industry.  Richard Crossman is a costume maker for film and television and will be exhibiting on the Main Street of Coldwater.  Adam Smith, a.k.a Mr. Steampunk is a leather maker whose props and leather pieces are featured in the newly released Hollywood Blockbuster Pompeii and Totall Recall will also be showing and selling at the Canadiana Museum. Returning this year is Kerri Mercer from Black Orchid Designs who makes plus size corsets and has created costumes for theatre and burlesque in Stratford, Ont.

The Severn Township Library (Coldwater) is hosting a Children's Village that will include free crafts, and interactive puppetry. At the Canadiana Museum, a special guest appearance from renowned Canadian Illustrator Frances Tyrrell, (The Woodland Christmas).  OMAH is hosting a special Steampunk craft free of charge.  Children's karaoke will be followed by a surprise visit from Elsa, a frozen Princess.  Live local music by Waubaushene’s The North Wind and Hamilton's Steampunk Babbage Industries will be on the Main Stage downtown Coldwater.

Mother Fudrucker's Horse & Buggy ride will take you to and from the Canadiana Museum from 12:00pm - 3:30pm, where you will find artisans, food, and a Mad Hatter's Tea Party.  Entertainer Peter Hurley, the Sword player (a fight director for film and TV) will perform an interactive Steampunk Weaponry Show.  Willow will be Belly Dancing on stage with Joyous Requiem and Chris & Friends playing live acoustic guitar.  Be sure to see the Featured Entertainment, a live "Birds of Prey Show'" at 2:00 pm.  Lots of parking is available. No dogs at Birds of Prey show allowed. (Thank you).

An art competition, costume contest, prize draw and reptile show by Safari Science (11:00 am under the tent) will take place.  Vintage cars, vendors, face painting and a photo booth will delight shoppers as they stroll the Historic Main street.  A special Geocache will be hidden the day of the festival.

See you in Coldwater Friday night and Saturday (Aug. 8 & 9) and don’t forget the goggles!

Special Event…On Sunday, August 10th, from 12:00 noon-3:00 pm, everyone is invited to join in a "Steampunk Sunday Social" at the S.S. Keewatin in Port McNicoll.  $5.00 off the price of the tour and some restaurant discounts may apply.

Note:  Costume attire encouraged but not required at all events.

For more information call (705) 715-6950.  For events and times visit steampunkfestivalcoldwater.webs.com
Posted by Jim Fox at 2:49 PM