What's happening on the Bloor St. Culture Corridor in September 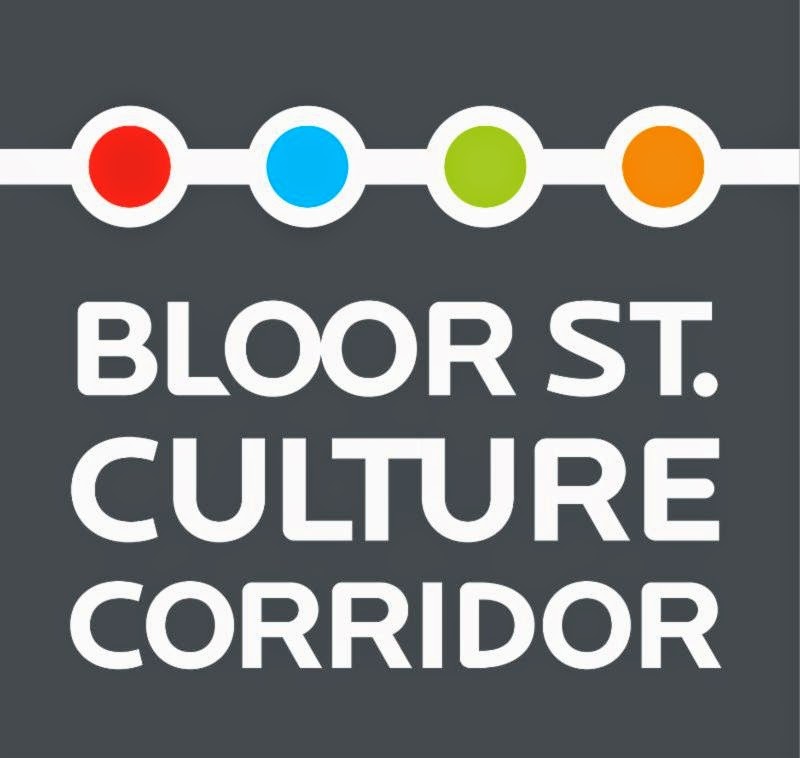 The Istituto Italiano di Cultura in collaboration with Mjölk presents TOTEMICA. Contemporary Italian designer Luca Nichetto and Russian designer Lera Moiseeva unveil the birth of a product, from initial concept, production, and realized prototype. A highlight of the exhibition is the international debut of Aureola, a tea set derived from Italian, Russian and Asian forms, utilizing natural materials found in Canada. On view now to September 16, 2014.

Japanese Design Today 100, now on view at the Japan Foundation, features 100 of the finest examples of Japanese design with a focus on everyday products. The exhibition combines superbly designed products of recent years with a modern designs from the 1950s through the 1990s that had a significant influence on the design of today. On view now to October 30, 2014.

On now at the Bata Shoe Museum, Fashion Victims: The Pleasures and Perils of Dress in the 19th Century provides thought-provoking insights into challenges faced by those who produced fashionable dress in the 19th century and the risks taken by those who wore it - and what it means to be a fashion victim. Fashion Victims is on view to June 30, 2016. Also currently on view at the Bata Shoe Museum, Collected in the Field: Shoemaking Traditions From Around the World highlights the history of shoemaking traditions;  Beauty, Identity, Pride: Native North American Footwear with ninety pairs of shoes, boots and moccasins chosen entirely from the Museum's comprehensive collection of Native footwear; and All About Shoes  with Footprints on the World Stage a special feature exhibition of extraordinary footwear worn in moments of triumph on the world's stage, worn by icons like Pierre Trudeau, Madonna, Roger Federer, Napoleon, and Marilyn Monroe.

The Miles Nadal Jewish Community Centre presents Unusual Occurrences in the Diaspora, a collection of works by Oakville based artist David Borochovitz that address the question "how does one appropriately deal with the death of six million, especially when he or she was not present?" Borochovitz explores how trauma is experienced as a third generational witness to these events. On view September 6 - 28, 2014.

The Royal Ontario Museum (ROM) features more than a dozen special exhibitions in September, including The Entire City Project: Royal Ontario Museum where every linear foot of the ROM is revealed like never before;  Cairo Under Wraps: Early Islamic Textiles, a rare glimpse at archaeological textiles and costumes; Fashion Follows Form: Designs for Sitting of fashion inspired by function; Around 1914: Design in a New Age a pivotal period of innovation and experimentation; Jane Ash Poitras: New Acquisitions of Contemporary First Nations Art; Dinosaur Eggs and Babies: Remarkable Fossils from South Africa; Collecting Asia: The First 50 Years, 1908 - 1958; as well as 100 Years of Collecting celebrating a century of collecting at the Royal Ontario Museum, and more.

The Bloor Hot Docs Cinema presents compelling documentary films every day of the year. This September their lineup includes the Doc Days of Summer series, featuring 11 of the best documentaries of the year, from August 29 to September 4. Walking the Camino: Six Ways to Santiago, Particle Fever, Alive Inside, Life Itself and many more films will be screened. Vermeer and Music: The Art of Love and Leisure has its final screening on September 3, as part of the Exhibition on Screen series. Filmed in London's National Gallery, New York's Met and galleries in the United States and the Netherlands, this stunning film showcases Johannes Vermeer's finest pieces, along with music from the Academy of Ancient Music.  As part of the Bloor St. Culture Corridor hub for Culture Days, the Bloor Hot Docs Cinema is featuring two free screenings on the weekend of September 26. Planet In Focus presents The Green Chain (Saturday, September 27) a powerful and thought-provoking film about people who love trees and the battle between loggers and environmentalists. The Reel Asian Film Festival Presents I AM: SMTOWN Live World Tour (Sunday, September 28), which follows the lives of SMTOWN K-POP artists, featuring never-before-seen interviews and footage of their historic concert at New York's Madison Square Garden (In Korean, with English subtitles). The cinema will be launching their full September schedule on August 22.

Strange Fruit will be on screen at the Miles Nadal Jewish Community Centre on September 21, 2014, presented by the Toronto Jewish Film Society with the United Jewish People's Order (Toronto).Billie Holiday's heartbreaking 1939 rendition of Strange Fruit became a powerful emblem for African Americans in their long civil rights struggle. What is less known is that the song was written by a Jewish schoolteacher from the Bronx named Abel Meeropol. A post screening discussion with music educator Jonnie Bakan will take place in the Al Green Theatre.

Tafelmusik Baroque Orchestra and Chamber Choir presents Handel Fireworks, a thrilling season opener directed by Brazilian-born Rodolfo Richter of the Academy of Ancient Music. The performance includes works by Corelli, Heinichen, Telemann, and Vivaldi. Handel's Music for the Royal Fireworks ends the concert with a bang! The performances take place September 18 -21, 2014 at Koerner Hall.
The Royal Conservatory presents two free music events in celebration of Culture Days 2014. The
KOERNER HALL FREE FOR ALL! on Saturday, September 27, 2014 12pm-3pm (acoustic performances) and  5pm-8pm (amplified performances) is when Koerner Hall will be open for free to everyone - audiences and performers alike! Performers of all ages, genres, and backgrounds will have 5 minutes each to showcase their band, best song, spoken word piece, or other talent. The Royal Conservatory's flagship ensemble, ARC Ensemble (Artists of The Royal Conservatory), will present "The Hell Where Youth and Laughter Go," a commemoration of the start of WWI featuring works by George Butterworth and Edward Elgar, with Ian Deakin narrating contemporary writings. The free ARC Ensembleconcert takes place Sunday, September 28, 2014 at 7:30pm in Mazzoleni Concert Hall at The Royal Conservatory.

The Native Canadian Centre of Toronto presents the weekly Big Drum Social every Thursday evening, 6:30pm-9pm. Everyone is encouraged to come and enjoy the drumming, food, and a good time, at the longest standing social event in the Toronto Native community.

The University of Toronto Faculty of Music presents four concerts in Walter Hall this September. The Season Opening Concert with St. Lawrence String Quartet features works by Haydn, Golijov, and Verdi, on Tuesday, September 16, at 7pm. The new season of Monday Evening Concerts starts on Monday, September 29 at 7pm, as ensemble-in-residence Gryphon Trio and mezzo soprano Julie Nesrallah perform works by James Wright, Chan Ka Nin, and Tchaikovsky. On Tuesday, September 30 at 7pm, Accordin' To Joe celebrates Joe Macerollo's 70th Birthday and appointment as Officer of the Order of Canada with an accordion extravaganza! Curated by Ina Henning (DMA 2013), the concert features from Joe's compositions and a new commission for the occasion by Anna Höstman(DMA 2013). A special free Culture Days Recital with Harpist Caroline Cole will be on Saturday, September 27, at 7:30pm, when the winner of the 2014 Canada Council Virginia Parker Prize will perform music for harp including a world premiere of Sailing on Starlight by Evan Fein.

ROM 100 Speaks, the ROM's Centennial Lecture Series offers an opportunity to discover and engage through intriguing talks by global thought-leaders, researchers, and artists. Running September 26 - March 31 at the Royal Ontario Museum (ROM), the first event in the series, De-extinction Dialogues, takes place on September 26 with a live choral performance created by visual artist Sara Angelucci. Immediately following, Dr. Joel Greenberg from Chicago's Field Museum and Academy of Sciences and Dr. Ben Novak from the Long Now Foundation discuss the demise of the passenger pigeon a century ago and the use of ROM passenger pigeon DNA to sequence the genome, which may enable scientists to bring this species back to life. Audience members are invited to meet the scientists at the post-lecture reception.

The Miles Nadal Jewish Community Centre presents Songs of the Folk Revival with singer/songwriter Eve Goldberg on Thursdays, September 11 and 18 at 1:30 pm. These interactive lectures offer a chance to sing along to some favourite songs from the 1960s folk revival, and learn about the history of folk music, the musicians who made it, and the songs that changed our world. Four 'Jewish' Operas with Iain Scott, one of Canada's foremost opera educators, will focus on Nabucco, La Juive, The Tales of Hoffmann, and Samson et Dalila to demonstrate how Jewish culture has been portrayed in great 19th century operas. The 4-part series takes place on Mondays, September 8, 15, 29, and October 6, 1:30 - 3:30 pm.

The Native Canadian Centre of Toronto's Fundraiser Gala & Silent Auction on September 13, 5pm-7:30pm, offers the opportunity to support and learn about the Native Canadian Centre's Memory Meaning-Making & Collections project. Items from the artifact and art collection will be on view, Cris Derksen will present a musical performance, and people can bid on silent auction items ranging from a rare framed print of Carl Beam's "Fragile Skies" or "The Next Leaders" original painting by Manitou Animki Renashi to jewellery and artwork by local Aboriginal artists Phil Cote, Barb Nahwegahbow, Amber Sandy, and Mike Ormsby, and more.

The Bloor St. Culture Corridor arts and culture destinations include: