Ranking up there with the top canals in the world, the Trent-Severn Waterway is an engineering marvel but not just a pretty face for tourism.
It’s getting busy on the waterway as the navigation season opens this weekend and continues through Thanksgiving, connecting the playgrounds of Lake Ontario and Lake Huron.
The waterway flows 386 kilometres, linking the Bay of Quinte to Georgian Bay through a system of rivers, lakes, canals and locks.
Operated by Parks Canada, the waterway is Canada’s largest national historic site.
Parks Canada says the “romance” of the Trent-Severn has evolved from its roots in the 1800s as a commercial/military shortcut across central Ontario.


It now has 44 locks, a marine railway and 160 water control structures as “an important part of both the local tourism economy and quality of life for residents in communities along its length.”
Behind that pretty face, the canal’s dams play an essential role in water management and hydro electricity generation.
Just like a super highway, the waterway is in need of regular maintenance.
The federal government is investing more than $600 million to repair, rehabilitate or replace the network of locks and bridges across the waterway, much of it from this year to 2020.

Cruising the waterway
Whether by car, motorcycle, bicycle or boat, a great day trip or longer is cruising the waterway.
Parks Canada says most lock stations are located next to or a short distance from a major highway or byway and roadside “beaver signs” steer you to the attractions. 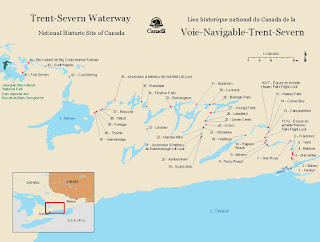 “Since there is so much to experience at each lock – whether it is boat watching, picnicking or relaxing in a park-like setting – taking excursions to see and enjoy the locks by land has become a favourite pastime for many,” the agency says.
It’s fun watching Parks Canada workers scurrying in circles, cranking open and closing the lock’s massive gates using hand winches.

Day trips
- Travel by motorcycle or car to Big Chute Marine Railway near Coldwater that’s the only one of its kind in North America.
Start out on the Upper Big Chute Road winding 42 kilometres through rock bluffs and pines of the Canadian Shield that inspired the Group of Seven painters.
At the site, the Severn River has carved a narrow chute out of solid granite and the railway portages boats in a 100-tonne open carriage.
There’s an observation deck to watch workers scramble up and down ladders to operate the slings and carriage.
It lifts boats almost 18 metres over a ridge between the Severn River and Gloucester Pool on Georgian Bay and slips them gently back into the water on the other side.
Stay on to barbecue, picnic or swap tales from the road.
- Another marvel is the Peterborough Lift Lock National Historic Site on the Otonabee River section of the Trent Canal.
As the highest lift lock in the world, it opened to great fanfare in 1904 and is powered by gravity, lifting boats 19.8 metres.
The lock operates on a balance system, with water let into the upper chamber and then a connecting valve is opened and the heavier chamber automatically descends, forcing up the lower chamber to start a new cycle.
- Nearby are two prime summer boating towns in the Kawartha Lakes – Bobcaygeon and Fenelon Falls.
The two historic lumber towns have thriving main streets, colourful shops and upscale waterfront dining.
Bobcaygeon is between Pigeon and Sturgeon lakes at Lock 32, the first lock built on the waterway in 1833.
To the west, Fenelon Falls, called the “Jewel of the Kawarthas,” has spectacular granite cliffs at Lock 34 between Sturgeon and Cameron lakes. Waterway details: pc.gc.ca/eng/lhn-nhs/on/trentsevern/index.aspx; 1-888-773-8888

Jim Fox can be reached at onetanktrips@hotmail.com
For more One-Tank Trips: http://1tanktrips.blogspot.ca
Posted by Jim Fox at 1:19 PM