Anything Goes Through the Ages at the Princess of Wales Theatre, Toronto 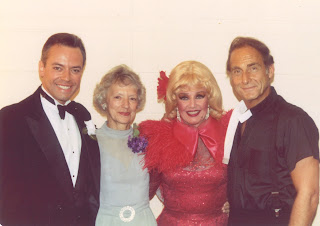 The musical ANYTHING GOES was originally written in 1934 as a vehicle for Cole Porter's great songs and for the acting, comedic, singing and dancing talents of such stage legends as Ethel Merman.

It immediately set the standard for the American musical and is now considered one of the classics of the genre.  Over the years, it has been one of the most revived musicals, with a definitive production being staged for every generation since the original.
The latest acclaimed revival began on Broadway in 2011, where it was honoured with three Tony Awards, including Best Musical Revival and Best Choreography (Kathleen Marshall, who also directed).

The touring version of that production has just opened to rave reviews at Toronto's Princess of Wales Theatre, starring the luminous Rachel York as Reno Sweeney, and plays until August 25, 2013.

Ross Petty, one of Canada's leading musical theatre actors and producers, just happened to have starred as the principal male lead in a touring production early in his career. It was 1980 and Petty played Billy Crocker opposite Ginger Rogers as Reno Sweeney. The cast also included another legendary performer: Sid Caesar, who played Moonface Martin (aka Public Enemy Number 13).

Remembering the year Petty played in ANYTHING GOES, he attended the July 24th evening performance at the Princess of Wales Theatre with his wife Karen Kain, the Artistic Director of the National Ballet of Canada.

After the show, Petty and Kain went backstage to meet the cast. He reminisced with Rachel York, Josh Franklin (who plays Billy Crocker) and Fred Applegate (who plays Moonface Martin) about his work with Ginger Rogers and Sid Caesar more than three decades ago.

Petty remembers when his mother, Violet, saw the show and then visited him backstage. He introduced her to the rest of the cast and a photo was taken of her with the stars. Luckily, Petty was able to locate that photo, in all its "Instagram" colour splendour.

To almost recreate the moment, Petty posed for another photo with the current stars of the 2013 production of ANYTHING GOES

ANYTHING GOES is truly a musical for the ages.

Discounts for Groups of 20 or more:  416-593-4142
For more information, visit www.anythinggoesthemusical.com