A Special Report for those driving north to Midwestern States or Canada, from Florida 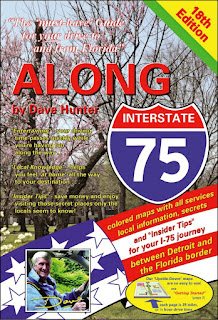 As news continues to flow around the COVID-19 (Coronavirus) situation, we Snowbirds who have driven to
Florida for the winter and are still here, are faced with a number of unknowns as we plan to head back up I-75 to our homes in the North.

Are rest areas open? Will state borders be closed so we cannot travel through them on the way home? Will my
pets catch the virus? Are all the lodgings closed?
I receive these and many other emailed questions from my readers on a daily basis and as a journalist, only use
credible sources such as Atlanta's Centers for Disease Control, various Governor's offices and Dept. of
Transport websites for answers.
In these dangerous times, the strategy is to travel in our car with minimal contact with other folk who may or may not already be affected, so let's break our journey plan into small steps, and see what we can do to minimize our contact with potential virus carriers.
Coronavirus particles range in size from 0.14 to 0.06 microns (for comparison, a human hair averages 50 microns in width) so unless you have a special HEPA car cabin filter installed (Bosch sell these for some makes and models), the interior environment of your car can probably be penetrated given certain circumstances. But for practical purposes, think of your car as a self-contained "space capsule."

Learn how to take better day-trip and vacation photos

School is in for those with some extra time on their hands and are eager to improve their day-trip and vacation photos.
Nikon is offering free online photography classes for this month for what would normally cost up to $150 in total with more than seven hours of instruction time.
“Nikon wants to help you make the most of this uncertain time – that’s why we’re providing all of our online courses free,” the company said about its school initiative.
Its mission is to “empower creators” in these “uncertain times and we can do that by helping them stay inspired, engaged and growing,” it added.
From now through April 30, Nikon is offering the streaming of its classes led by professional photographers.

Click, click
- Starting with Exploring Dynamic Landscape Photography, instructor Taylor Glenn shows how to make a picture, not just take one.
He gives tips and techniques for crafting a beautiful landscape photograph that will “transform your photography, no matter what type or brand of camera.”
Read more »
Posted by Jim Fox at 12:36 PM No comments:

Virtual travel is just like being there - for now

These are tough times for publicists and employees of tourism agencies promoting all the fun times and scenic locations that we hope to sometime visit again.
Now that most people are confined to their rooms and backyards, tourism promotion has turned virtual to see and hear what we’re missing.
It’s sort of like today’s answer to having friends over to see slides (usually dozens and dozens of scenery and blurry images) from their trips.
These are unprecedented times for day-trips and travel, reflecting a new strategy for public relations agencies such as Enterprise Canada.
“People feeling cooped up during the current public health emergency can get a virtual taste of some great travel destinations in southwestern Ontario without leaving the safety of their homes,” said Enterprise’s Stephen Murdoch.
Virtual tours “help people expand horizons during social distancing,” said associate Courtney De Caire.
Read more »
Posted by Jim Fox at 6:24 PM No comments:

Detroit auto show screeches to a halt; other car shows still revving up

Detroit has been hard hit by the coronavirus (COVID-19) pandemic, resulting in the cancellation of the North American International Auto Show.
Organizers of two other headline auto events still hope to have them go ahead this summer.
It’s a huge blow as the auto show attracts 800,000 people over its 10-day run and this was to have been the first show in June after its history of January dates.
It’s also devastating to Greater Detroit as the party of the year – the $400 U.S. black tie Charity Preview – that raised millions of dollars over the years for children’s charities.
But it’s all for the greater good as the TCF Center (previously known as Cobo Center) will become a temporary field hospital as directed by the Federal Emergency Management Agency.
“The level of excitement for the 2020 show was extraordinary and we deeply appreciate all of the support from our OEM partners and our more than 200 valued sponsors, as well as the city of Detroit and the state of Michigan,” chairman Doug North said.
Read more »
Posted by Jim Fox at 10:31 AM No comments:

Top 100 Ontario festivals waiting to get back on track

Once travel and day-trips resume around Ontario, here are 100 suggestions of what to do and see.
There’s everything from retrofests, river fests, strawberry, corn and apple fests to jazz fests, canal days and Oktoberfest.
They are among the events named in the Top 100 Festivals and Events by Festivals and Events Ontario.
“These Top 100 recipients represent festivals and events that excel within the industry,” the association said.
While Elvis has left the building for good in Collingwood and his summer festival isn’t returning this year, fans can head to Tweed, north of Belleville, to see tribute artists celebrating the “King of Rock ‘n’ Roll.”
Among the top 100 is the Tweed Elvis Festival, 10th anniversary, scheduled for Aug. 23 to 25.
Included in the prestigious fests are those of distinction that “represent some of the most well-known and respected celebrations in the province – celebrations which draw both an international and domestic audience.”
Doors Open Ontario is the province-wide program, delayed this year, that normally runs from April to October, led off by Guelph.
It gives visitors are look behind doors that are normally closed to the public, highlighting
special places – often hidden gems.
When it’s rescheduled, among Guelph’s eight stops organized by the Guelph Arts Council are the University of Guelph president’s 1882-era house, Sleeman Breweries and the Hammond Museum of Radio.
Read more »
Posted by Jim Fox at 3:38 PM No comments: