Stratford, ON – Brace yourself for an indulgent musical journey when Rant Maggie Rant, one of Canada’s most innovative Celtic World Beat ensembles, comes to Windsor for a Celtic summer sunset concert on July 13, 2012. 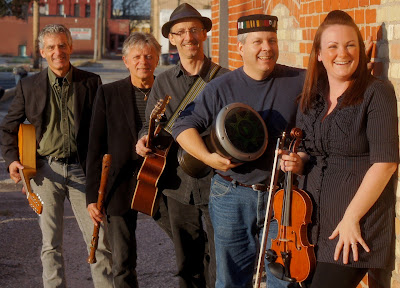 This outdoor concert takes place in the Victorian Gazebo, located in the park adjacent to the historical and elegant Mackenzie Hall Cultural Centre, at 8:00 pm. Beautifully landscaped with flowers and mature trees, the gazebo is equipped with an amphitheatre seating area or bring your own lawn chair. In the event of rain, the concert will move indoors.

Audiences always have a rousing good time at Rant Maggie Rant concerts. From their energetic on-stage presence, to the band’s ability to really connect with its audience, it is self-evident that Celtic music is in the fibres of the band’s heart.

Rant Maggie Rant is a band that likes to mischievously colour outside the prescribed lines. The ensemble moves effortlessly from Irish jigs to Galician munieras, from Scottish marches to Breton an dros, driving them with exotic and syncopated hand-percussion, blues/rock guitar backdrops, revved up tempos, surprising time changes, and unique rhythmic attacks. During their concerts, Rant Maggie Rant will deliver a beautiful traditional ballad, chase it up with an Appalachian-style groove and end with a killer jig or reel.

Traditionalists love their approach, as they respect the time-honoured styles. Drawing on the music from the seven Celtic nations of Ireland, Scotland, Cornwall, Wales, and the lesser known Isle of Mann, Galicia (Spain) and Brittany (France), as well as from Quebec and Canada's Maritime Region, a legion of new Celtic music listeners and fans are drawn to Rant Maggie Rant's fusion of World influences, including Latin, Middle Eastern and African hand percussion and rhythms.

Considered one of the best in Canada, fiddler Lindsay Schindler has established herself as an electrifying performer: lightning fast and incredibly smooth with contagious energy, as well as a smile that lights up the stage. With a strong bow hand, she drives the music along.

Based in Stratford, Ontario, Rant Maggie Rant has been wowing audiences on the road for the past three years at festivals, concert halls and symphonic stages in Canada and the U.S. with their outstanding artistry and on-stage vibe. A tight, coherent unit, Rant Maggie Rant takes audiences on a unique journey through Celtic music, appealing to both traditionalists and those who enjoy the evolution of sound.

“I can truly say that you were the surprise ‘WOW’ band this year – so much great feedback about your music.” – Sheila Graziano, Saline Celtic Festival, Saline, Michigan

“RMR is a great band. They packed the house and the audience left dancing. I can't wait to have them back.” – Holmes Hooke, Hughs Room, Toronto, Ontario, Canada