On Saturday July 21, visitors to Discovery Harbour will be treated to Ditties and Shanties, an all-day musical highlight featuring a fun assortment of traditional music taking place throughout the beautiful waterside historic site. 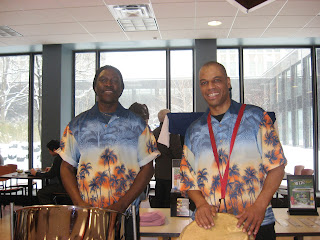 NEW this year will be the Kenn Lewis Steel Drum Duo, playing an eclectic assortment of great tunes on their magnificent steel drums.  Kenn Lewis is an outstanding musician, producer, and songwriter who has played in Toronto and suburban cities for the past 24 years.

Born in the twin Federation islands of St. Kitts and Nevis in the Caribbean, his love for music started at the age of seven.  The styles of music he plays range from Reggae to R & B, but his main musical themes are Caribbean Rhythms called Soca, Calypso, and Zouke.  Lewis was nominated for a Reggae Award in 2002.

The Playford Players are composed of guitarist Philip Corke from Burlington and hammer dulcimer player Roland Packer from Hamilton.  Philip and Roland began by writing diverse arrangements of traditional English, Irish and Appalachian tunes for hammer dulcimer and guitar.  Their resulting blend of folk, pop, jazz and classical styles has been described as "light, bright, lilting music that sets the toes, and the soul, tapping."

Discovery Harbour’s own costumed staff has formed a lively group called The Salty Sailor Singers to add to the musical day, and they will perform energetic sea shanties at various locations on the historic site.  Families can also enjoy 19th century games and on-deck activities aboard the impressive historic ships H.M.S. Tecumseth and Bee.  A great summer treat, refreshing iced tea will be served in the picturesque Keating House.
The Ditties and Shanties musical highlight is at Discovery Harbour on Saturday July 21 and is included with regular site admission.  For further information call (705) 549-8064 or visit www.hhp.on.ca

Discovery Harbour is operated by Huronia Historical Parks,
and is an attraction of the Ontario Ministry of Tourism, Culture, and Sport.
Posted by Jim Fox at 5:43 PM