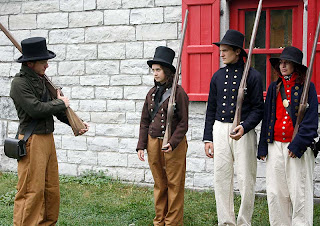 It is the War of 1812 at Presqu’ile, and the area settlers are in an anxious state. One month ago American Raiders, under the command of Lieutenant Gregory, landed at Presqu’ile.

They burned Mr. Gibson’s shipyard to the ground, destroying a vessel almost ready for launch and his store house. Lt. Gregory has told the locals he intends to return, ominously promising to “finish a good deal and set all to right.”

In the days since then, American raiding vessels have been spotted in the local area, and only one week ago Colborne was raided.


Members of the Northumberland Militia, as well as a detachment of Glengarry Light Infantry and Provincial Marines, are now guarding a supply camp at Presqu’ile. Will the raiders return for this new prize? Will the Canadian defenders be able to drive them off? Only time will tell.

As numerous locations across the country commemorate the bicentennial of the war of 1812, Presqu’ile too will be showcasing its role in the war that led to the shaping of our nation. Although no official battles were fought here at the point, Presqu’ile still holds many unique and interesting stories surrounding this historic event.

On Friday August 3rd, come out and watch a film about the war of 1812.

All day Saturday families can wander through the Presqu’ile supply camp and explore what life was like 200 years ago. This will include a mini muster for the kids, a fire competition, and displays showcasing weaponry, the convoy system, and the role of women in the war. In addition to this, you can build your own boat, and take part in old fashioned fun and games.   That evening, all will gather at the amphitheatre and decide who was responsible for the burning of George Gibson’s gunboat.

Sunday August 5th the encampment will still run on with a demonstration of a prisoner encampment. Sunday will also feature our annual Calithumpian Parade and Presqu’ile regatta. All is well at the point until the American Raiders return and raid the Presqu’ile supply encampment!   Later that night, visitors to the park will be given the opportunity to take a guided Lantern Tour through this encampment to see the aftermath of this daring raid.

The Friends of Presqu’ile’s mouth watering BBQ will also be taking place both days!

“This is a very special History Weekend that no one should miss!  The War of 1812, is a part of history that is sometimes overlooked.  This weekend will let everyone see how life was lived during this time period, covering topics from weaponry to medical procedure! ,” Says Lisa McPherson, Nature Heritage Education Leader.
For more details on Presqu’ile’s History Weekend, pick up an activity schedule at the park gate of check the Friends of Presqu’ile website or call Lisa McPherson, NHE Leader at 613-475-4324 ext 225.  Regular park admission fees apply.

History Weekend 2012
The Forgotten Corner of the War of 1812
August 3rd, 4th and 5th
THROUGHOUT THE WEEKEND
Daily 10am to 5pm – Cultural History Exhibits @ Lighthouse Interpretive Centre
Daily 10am to 4pm – Natural History Exhibits @ Nature Centre
FRIDAY August 3rd
8:00pm – The War of 1812 (Film) @ Amphitheatre
Come and enjoy a film introducing us to the War of 1812. A good way to kick off a weekend back in time!
SATURDAY August 4th
All Day (Starting 10am) – War of 1812 Encampment @ Field Across from Amphitheatre
Come and experience what life was like during the War of 1812. see the Weapons of 1812, experience Camp Life for Women, discover the convoy system that put Presqu’ile on the map, and much more!
10am to 11am – 1812 Mini Muster @ Field Across from Amphitheatre
Want to join the war? Sign up here! Join the mini militia to test your musket skills.
11am to 1:30pm – Friends of Presqu’ile BBQ Social @ Campfire Field
Engaging in war can sure make you hungry! Join the Friends of Presqu’ile for some mouth-watering burgers and hotdogs and some thirst-quenching refreshments.
12pm to 1pm – Firing Competition @ Field Across from Amphitheatre
Think you know your way around a musket? Think again! Join some of our re-enactors and watch the display of a real-life firing competition.
1pm to 2:30pm – Schooner and Bateaux Building Bee @ Amphitheatre
Putting a new twist on an old Presqu’ile Tradition. Our annual Boat Building Bee has been sucked back in time!  You will create vessels that look similar to those that sailed the waters of Lake Ontario in 1812. They will be put to the test on Sunday
3pm to 4:30pm – Old Fashioned Fun and Games @ Campfire Field
Come one come all to Presqu’ile’s fun and games. Come watch our many activities and enjoy our many games like potato sack, three-legged, and wheel barrow races, along with egg toss and more!
4pm to 4:30 – Lighthouse Walking Tour @ Lighthouse Interpretive Centre
Take a journey back in time on this walk around the lighthouse
8pm to 9pm – Presqu’ile’s Official Court of Inquiry “Who Let the Ship Burn?” @ Amphitheatre
It was one month ago that George Gibson’s schooner was burned to the ground. Someone needs to be held responsible. YOU decide who shall be blamed for allowing this tragic event to transpire.

SUNDAY August 5th
All Day (Starting 10am) – War of 1812 Encampment @ Field Across from Amphitheatre
Come and experience what life was like during the War of 1812. See the Weapons of 1812, experience Camp Life for Women, discover the convoy system that put Presqu’ile on the map, and much more!
11am to 1:30pm – Friends of Presqu’ile BBQ Social @ Campfire Field
Engaging in war can sure make you hungry! Join the Friends of Presqu’ile for some mouth-watering burgers and hotdogs and some thirst-quenching refreshments.
12pm to 1pm – Prison Camp @ Field Across from Amphitheatre
Presqu’ile was known as a stop-over point for those troops carrying prisoners of war. Come see how these somewhat tricky operations took place
2pm to 2:30pm – Calithumpian Parade @ Campfire Field
Bring your pots and pans, your outrageous costumes, and of course your loudest voice as we parade through the campgrounds in an act of out-right craziness. Be sure to bring your boat you built yesterday as we finish the parade at the Regatta (see below)
2:30pm to 3:30pm – Presqu’ile Annual Regatta @ Day Use One
Put your schooners and bateaus to the test as we take part in one of the longest standing Presqu’ile Traditions: The Annual Regatta! 1st, 2nd, and 3rd prizes in each age category.
4pm to 5pm – 1812 Battle Demonstration “American Raid!” @ Field Across from Amphitheatre
Lt. Gregory is back with the American troops! How will the members of the encampment fair? See what unfolds during this 1812 battle.
4pm to 4:30pm – Lighthouse Walking Tours @ Lighthouse Interpretive Centre
Take a journey back in time on this walk around the lighthouse
8pm to 8:30pm – Peter Solmes’ “Songs of Presqu’ile” @ Amphitheatre
Peter Solmes joins us once again with his many tales of life on the point through the generations. Be sure to sing along!
8:30pm to 9:30pm – Lantern Walk “After the Raid” @ Amphitheatre
Lt. Gregory and his troop of American Raiders have come and gone. Now we get a chance to wander through the encampment and witness the damage they have done. Be sure to bring your Lantern.