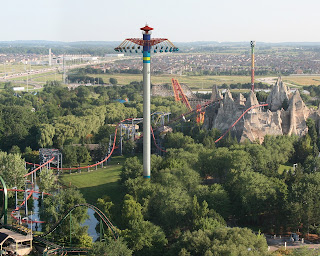 WindSeeker, a “gravity-defying” adventure, joins the arsenal of adrenaline-pumping, white-knuckle thrill machines at Canada’s Wonderland this season.
Along with 15 roller coasters and seven thrill machines, WindSeeker towers 91.7 metres above the park, swinging riders out at a 45-degree angle.
“Riders will soar in 32 two-person swings that will provide a gravity-defying thrill as their feet dangle high over Canada’s Wonderland,” said Dineen Beaven, manager of public relations and special events.
And, that’s not all.
“Spinning at dizzying speeds of up to 50 km/h and towering above Behemoth and Drop Tower, WindSeeker is changing the landscape of thrills for guests this season,” she added.

As the theme park in Vaughan, north of Toronto, opens Sunday (May 8) and marks its 30th season, there’s a special opening-day price of $30 plus tax. This is to “commemorate 30 years of memorable thrills.”
Wonderland has 68 rides and offers what Beaven says is “one of the greatest selections of rides and entertainment in North America.”
Lighting up Wonderland in June
Also new will be Starlight Spectacular starting June 25.
This innovative show will “dazzle the senses” when the Royal Fountain dances in up to 16-million colours and International Street glitters with 300,000 lights.
The highlight of the show is “an unprecedented display of animated effects and 3-D images that will transform the mountain into a canvas of colours. It lights up nightly throughout the summer around 10 p.m.
For thrills of a different kind, visitors can check out the park’s line-up of live shows.
New is Start Me Up, a high-energy showcase of swinging 60’s sounds, 70’s glam rock and 80’s power pop, at the International Showplace.
At Playhouse Theatre, parents and children can enjoy Charlie Brown’s Pirate Adventure, called a swashbuckling show for little adventurers, starring J.T., Linus, Lucy and Charlie Brown.
Popular favourites Snoopy Rocks on Ice, Victoria Falls High Divers and Kinet-X return.
Hang on to your hats
Along with WindSeeker, Wonderland has introduced many popular rides including Behemoth, Canada’s biggest, fastest and tallest coaster, with a 75-degree drop at speeds reaching 125 km/h in 3.9 seconds.
Since the park opened in 1981, its landscape has grown with new attractions yearly along with shows, themed children’s areas and special events.
It’s become two parks in one with Splash Works, a summertime 20-acre water park with the country’s largest outdoor wave pool. It features heated water attractions, including 18 speed slides and interactive water elements.
The park also has a diverse range of restaurants serving an eclectic mix of tastes, as well as gift shops offering souvenirs and memorabilia.
Last summer, Planet Snoopy was unveiled providing children with new rides, character meet-and-greets and live entertainment featuring the Peanut’s gang.
Every fall, Wonderland is transformed into a “dark playground of terror” for the Halloween Haunt.
There are “blood-curdling mazes, demented live shows, bone-chilling rides” and more than 300 monsters including creepy clowns and deadly creatures.

Prepare for blast off
- Here’s the manifest of Wonderland’s hair-raising coasters with the names telling all: Behemoth; Back Lot Stunt Coaster; Time Warp; Silver Streak; Flight Deck; Vortex; the Bat; SkyRider; Dragon Fire; the Fly; Mighty Canadian Minebuster; Wild Beast; Thunder Run; Ghoster Coaster; and Taxi Jam.
- Thrill rides are: Sledge Hammer; Psyclone: Shockwave; Riptide; Drop Tower; Xtreme Skyflyer and Jet Scream.
- In addition, there are dozens of rides for children as well as family attractions including an antique carousel.
Wonderland in numbers
- It would take almost 155 million bottles of water to fill Splash Works.
- About 200,000 funnel cakes and more than 100,000 foot-long hotdogs are consumed each season.
- A half-million stuffed toys are won each year.
- The Victoria Day and Canada Day fireworks celebrations each use 4,000 fireworks.
- Victoria Falls on Wonder Mountain powers the entire park's air-conditioning systems.
If you go:
- Canada’s Wonderland is open from May 9 to Oct. 30, with days and hours varying in the spring and fall.
Admission is $55.99 plus tax while there are deals on-line. Best value is a season pass for $59.99 to $79.99 plus tax; parking is $10. Opening day admission is $30. www.canadaswonderland.com; (905) 832-7000.
Jim Fox can be reached at onetanktrips@hotmail.com
Posted by Jim Fox at 3:39 PM