(c) By Jim Fox
You don't have to travel far to enjoy what has been called "one of the top 10 waterway trips in the world."
In fact, National Geographic's book, Journey's of a Lifetime, highlights Ontario's Trent-Severn Waterway as brimming with "charming villages with a European flavour, rocky gorges and sapphire-clear, forest-lined lakes."
There couldn't be a better time to cruise the waterway or visit the many cities and towns along its route than in the fall when the shorelines are awash in the colours of the changing season.
Canadian Geographic goes on to say the waterway "comprises three of the most sensational mega-toys that any child or adult could ever hope to witness in action."
These are two lift locks -- the one at Peterborough built in 1904 that's the world's highest hydraulic boat lift at 20 metres and the Kirkfield lock.
There's also Big Chute -- not a lock at all but a marine railway -- that's a massive wheeled carriage to transport boats up or down a long chute of granite.
This allows boaters to portage over land without leaving their vessels between Gloucester Pool and the Upper Severn River.
Operated by Parks Canada, the Trent-Severn is a favourite waterway for both boaters and nature lovers.
It's an easy "one-tank trip" to get to by car just to watch the marine traffic or to rent a boat or take a day cruise.
Declared a National Historic Site of Canada, this recognizes its days in the 17th century when fur traders and then in the mid-1800s when lumber barons used the waterway for commercial purposes.
Now, the waterway is used exclusively by pleasure boats.
Meandering for 386 kilometres through the scenic heartland of Ontario's "cottage country," it connects Lake Ontario at Trenton with Georgian Bay at Port Severn.
It links lakes and rivers by using 44 locks to lift or lower boats to the various elevations encountered en route.
There are also 39 swing bridges and the once-turbulent waters are now controlled by 160 dams and structures to manage levels for flood control and navigation.
Open from mid-May to mid-October, the waterway encompasses the Trent River, Otonabee River, Kawartha Lakes, Lake Simcoe, Lake Couchiching and the Severn River.
Not a boring sailing, the beauty and variety of its scenery is one of the waterway's major assets. 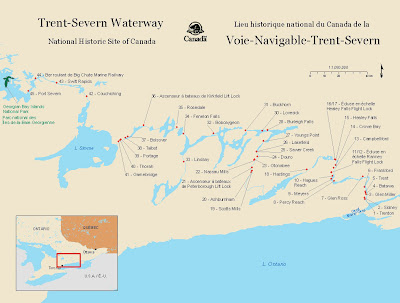 Arriving at Lock 1, the "Gateway to the Trent-Severn Waterway," at the Bay of Quinte, boaters travel north through the valley of the Trent River. They pass by lush farmland, marshes rich with wildlife and waterfalls in rocky gorges.
At Rice Lake, south of Peterborough, there's the distinctive tear-drop islands (drumlins) that welcome boaters to the Kawartha Lakes.
The Trent and Severn drainage systems are linked at Kirkfield where the canal was carved through the solid limestone of the Carden Plain to provide access to lakes Simcoe and Couchiching at Orillia.
The journey then continues on a northwesterly route along the Severn River to Georgian Bay.
On this ancient waterway, one of the largest single concentrations of native rock carvings in Canada can be seen at Petroglyphs Provincial Park near Burleigh Falls.
There are also prehistoric burial mounds, such as those at Serpent Mounds Provincial Park on Rice Lake.
Parks Canada workers still manually open the gates to allow boats to pass through Lock 33 on the Trent-Severn Waterway in downtown Lindsay. (Jim Fox photo)
The first lock was built in 1833 in the heart of the Kawarthas at Bobcaygeon while the dream of building an inland navigation route from Lake Ontario to Georgian Bay took 87 years to become a reality.
A fun way to see the waterway is to rent a houseboat or take one of the many scenic cruises offered in most of the towns and cities en route.
Egan Houseboat Rentals (www.houseboat.on.ca; 1-800-720-3426) in Omemee has been in business for 35 years with a fleet of boats that will accommodate from one to three couples or one to two small families.
This is a way to combine the advantages of cottage living with the adventure of cruising. Boating instruction is provided and the last trips leave on Sept. 25 to 28.
Should the weather turn even cooler than the summer next month, the houseboats are equipped with furnaces and are fully insulated.
If you sail:
Hours of operation on the Trent-Severn Waterway are 8:30 a.m. to 7 p.m. through Labour Day and then 9 a.m. to 3:30 p.m, weekdays; 9 a.m. to 5:30 p.m., weekends and Thanksgiving Day (Oct. 10); closing for the season on Oct. 12.
For more information: www.pc.gc.ca/eng/lhn-nhs/on/trentsevern/index.aspx; 1-888-773-8888.
-30-
Posted by Jim Fox at 9:53 PM