Motown sounds, "Elvis" and lavish productions offered at this time of year

One-Tank Trip published on Dec. 10/11, 2011
(c) By Jim Fox
Seasonal song-and-dance routines, lavish productions and concerts fill the entertainment calendar at this time of year.
Take a “one-tank” trip back to Motown, experience an Elvis Christmas show and legendary stage performances of Hair, Mary Poppins and the Wizard of Oz or rock-and-roll with the Disney gang.
And, the hits just keep on coming
Motown Gold, a musical revue, relives the Marvelettes’ hit Dancing in the Streets with audience members dancing in their seats.
The all-Canadian cast of singers and dancers is at Stage West Theatre Restaurant in Mississauga now through Feb. 5.

The high-energy show moves and grooves back to the 1960s and ’70s with songs made famous by Berry Gordy’s Detroit-based Motown Records.
The 61 tunes in two acts include those by the Temptations, Four Tops, Marvelettes, Martha and the Vandellas, Supremes, Four Tops, Smokey Robinson, Gladys Knight and the Pips, Stevie Wonder, Contours, Mary Wells and others. 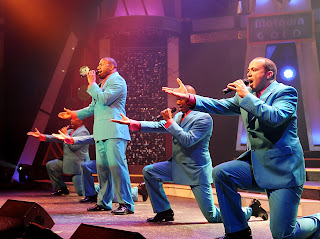 This music “blended the heart and soul of black music with the heartbreak of rhythm and blues to the ringing sounds of gospel” to become known as rock and roll, the narrator says.
Then, Stephen Kabakos makes it seem as if Elvis never left the building.
As the king of Elvis tribute performers, Kabakos brings his popular annual Christmas show back to Stage West on Dec. 19.
"The Way It Was" Vegas-style show recreates the Elvis experience “note for note, song for song and word for word" authentic, said publicist Laurie Wallace-Lynch.
Kabakos and his TVB (The Very Best) Ensemble mix in selections of Presley's greatest Christmas music.
He will be back for Aloha to Hawaii on Jan. 16 along with shows Feb. 13, May 28 and June 18.
Then, on Jan. 9 the Cavalcade of (Elvis) Champions features Tim E., Bruce Herron and Rick Lenzi along with seven other tribute artists during dinner.
The Stage West “Elvis” show along with a lavish buffet costs $65.99 while Motown performances are from $52.99 for matinees to $87.99 Saturday nights.  Hotel theatre packages are available. www.stagewest.com; (905) 238-0042
Pop in to see these
Hair, with a caution that it contains “a dimly-lit, 20-second scene with nudity that is non-sexual in nature” along with “sexuality, drugs, peace, love and hope,” continues in Toronto through Dec. 31.
The mother of all rock musicals that became a social and cultural phenomenon is at the Royal Alexandra Theatre.
This “jubilant assertion of life and freedom,” follows a group of friends in New York’s East Village during the Vietnam War era in the 1960s as they “turn on, tune in and sing out.”
For a change of pace, the original creative team reunited to bring the story of Mary Poppins, the world’s most famous nanny, to audiences across North America.
Megan Osterhaus from the Broadway production has the title role in the performances through Jan. 8 at the Princess of Wales Theatre in Toronto.
Escape over the rainbow as the Wizard of Oz runs until Jan. 6 at the Elgin Theatre in Toronto with Elicia Mackenzie cast as Dorothy.
Last call to see “Ted and Richard” in Toronto as 2 Pianos 4 Hands is extended until Jan. 5 at the Panasonic Theatre. Details: www.mirvish.com; 1-800-461-3333
A century of magic
Oldie-but-goodie Disney characters meet up with the new ones on ice at the Toronto Rogers Centre from Dec. 23 to Jan. 1.
Disney On Ice marks 100 Years of Magic with choreographed figure skating to the long-familiar stories and songs.
“The captivating production features the largest cast ever of lovable Disney stars on ice,” said publicist Beth Merrick.
This includes Mickey Mouse, Minnie Mouse, Buzz Lightyear, Woody, Pinocchio, Jiminy Cricket, Stitch, Nemo and the Incredibles, and Mulan and the Lion King. www.disneyonice.com; 1-855-985-5000
Disney Live! presents Three Classic Fairy Tales with some 25 characters led by Mickey, Minnie, Donald and Goofy who discover Snow White, Cinderella and Belle from Beauty and the Beast.
Tour stops include Windsor, Dec. 16; Hamilton, Dec. 29-30; Kitchener, Jan. 6; London, Jan. 8-9; Oshawa, Jan. 12; and Toronto, Jan. 13-15. www.disneylive.ca; 1-855-985-5000
Start me up
Elm Hurst Inn & Spa in Ingersoll presents the Rolling Stones Tribute Show and Festive Christmas Dinner and  Dance on Dec. 15 from 7 p.m.
It features Hot Rocks and the “world’s most-look-alike Mick Jagger,” said publicist Nicole Laidler. Tickets are $60. www.elmhurstinn.com; 1-800-561-5321
-30-
Jim Fox can be reached at onetanktrips@hotmail.com
Posted by Jim Fox at 11:21 PM