If the kids are “bugging” you to take them someplace during March Break, how about BugFeast?
That’s where Chef Jeff Stewart of “Creepy Crawly Cooking” serves up insects au honey at the Cambridge Butterfly Conservatory.
No butterflies are on the menu for BugFeast from March 13 to 22, offering a chance to “sample delicious insect treats.”
These include honey fudge topped with roasted superworms, honey-mustard flavoured crispy crickets and honey crunch protein bars made with cricket flour.
“You’ll find they are surprisingly good – especially when covered in honey – and are high in protein and nutrients,” said Adrienne Brewster, conservatory executive director.
The chef who is the associate dean of hospitality and tourism at Niagara College has a true passion for entomophagy.

That’s the art of eating insects that he studied in the Amazon and is a staple in the diet of 80 per cent of the world’s population.
There are 1,400 species of insects and arachnids that are edible and can provide a sustainable source of food, but no flies in the soup, however.
While there, take a tropical break in this exotic rainforest surrounded by thousands of free-flying butterflies from Costa Rica and the Philippines.
It bustles with hundreds of birds, insects and lush tropical species of plants.
The tasty bug concoctions are included in the price of admission ($11.50, adults; $10.25, seniors/youths 13 to 17; $6, children, three to 12; no charge for ages two and younger; with discounts on-line).
The conservatory at 2500 Kossuth Rd., Cambridge is open daily from 10 a.m. to 5 p.m.
cambridgebutterfly.com/events/bugfeast; (519) 653-1234

Frosty fun
There are two Disney on Ice shows, including the much anticipated Frozen in Toronto and Passport to Adventure in Hamilton.
Frozen is at Rogers Centre for 13 shows from March 18 to 22 with Anna, Elsa, Olaf, Kristoff and his reindeer, Sven, hosts Mickey and Minnie Mouse, and more favourite Disney characters.
The Hamilton performance is at FirstOntario Centre for nine shows March 19 to 22 featuring Mickey and Minnie Mouse travelling to four exciting destinations. disneyonice.com
Sleeping Beauty on Ice: The Imperial Ice Stars returns to Toronto March 14 and 15 at the Sony Centre for the Performing Arts. sonycentre.ca
The Four Seasons Centre for the Performing Arts presents Alice’s Adventure in Wonderland, a co-production with the Royal Ballet and National Ballet of Canada, from March 18 to 22. coc.ca
For details and more, go to Toronto Tourism:  SeeTorontoNow.com; 1-800-499-2514.


Stacking the bricks
Legoland Discovery Centre in Vaughan (1 Bass Pro Mills Drive), north of Toronto, is a place where adults must be accompanied by a child to enter.
This fun-filled indoor family experience has displays of some three-million Lego bricks, attractions including the Kingdom Quest Laser Ride and a 4-D cinema.

New is the Lego Star Wars Miniland model display with replicas of gladiator-style battles from the first Battle of Geonosis in Star Wars Episode II: Attack of the Clones. Details: legolanddiscoverycentre.ca/toronto; 1-855-356-2150

He shoots, he scores
Strike a pose with the Stanley Cup and put your goalkeeping skills to the test during March Break at the Hockey Hall of Fame in Toronto. 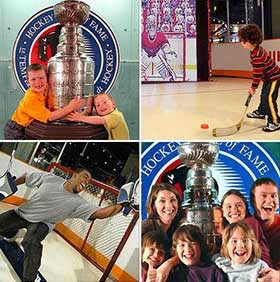 The shrine to the national sport is open extended hours – Monday to Saturday from 9:30 a.m. to 6 p.m., and Sunday, 10 a.m. to 6 p.m. hhof.com
Wizard World Fun Park from March 15 to 22 at the Better Living Centre, Exhibition Place, has indoor mechanical and inflatable rides, arts and crafts, animals, elephant rides and more. wizardworld.ca/Toronto
For superhero fun, there’s ComicCon, March 20 to 22 at the Metro Toronto Convention Centre. comicontoronto.com

Sugaring off
For a sweet treat, the Kinsmen Fanshawe Sugar Bush Maple Festival northeast of London is open weekends this month and daily through March Break from 9 a.m. to 4 p.m.
Horse-drawn wagon rides and walks through the maple forest tell of the making of maple syrup, while “mouth-watering pancakes dripping with our own warm syrup,” are served, said publicist Carol Cooper.
Admission to the fest at 21201-C Lakeside Drive, Thorndale costs $3, adults; $2, children to age 12; $10, families. kinsmenfanshawesugarbush.com; (519) 461-1073

Jim Fox can be reached at onetanktrips@hotmail.com
For more One-Tank Trips: http://1tanktrips.blogspot.ca
Posted by Jim Fox at 10:32 AM