TORONTO, ON, January 20, 2016: Today, the Toronto Zoo released a new video highlighting the first 100 days for the giant panda cubs. The 100 day celebration follows an ancient Chinese tradition that when a child reaches his or her 100th day of life, he or she has survived the risky fragility of infancy and may be considered on track for a successful future.

Er Shun gave birth to these beautiful twin panda cubs on Tuesday, October 13, 2015. Born at only 187 grams and 115 grams, these tiny cubs have grown from tiny, pink, hairless cubs to strong, fuzzy pandas with distinctive black and white markings.

"The Toronto Zoo is very honoured to be participating in the Global Giant Panda Conservation Breeding Program and extremely proud of the births of Canada's first giant panda cubs," said Mr. John Tracogna, Chief Executive Officer, Toronto Zoo. “We are very grateful for the ongoing partnerships with a number of institutions around the world who have contributed to our success,” he added.

The Toronto Zoo is hoping to introduce the panda cubs to the public in mid-March.  The Zoo would like to thank everyone for the outpouring of support for these cubs and for following us on this incredible journey.

"On behalf of the Board of Management, I want to commend the Zoo staff and particularly the giant panda keepers and the two giant panda specialists from China for their outstanding expertise, dedication and ongoing commitment to ensuring these precious cubs were given the best chance for survival," said Raymond Cho, Chair. 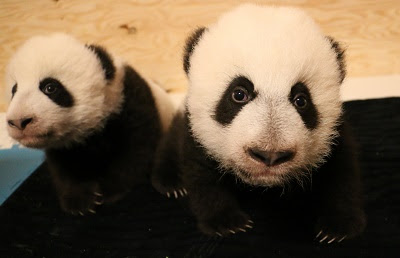 The Toronto Zoo would like to acknowledge the ongoing support from Chongqing Zoo and Chengdu Panda Base of Giant Panda Breeding for their expertise on raising baby pandas, and also for providing us with two giant panda specialists whose knowledge and experience has been invaluable during this time.

To support our work in giant panda conservation DONATE HERE.

Toronto Zoo is accredited by CAZA (Canada's Accredited Zoos and Aquariums). Look for this logo whenever you visit a Canadian zoo as your assurance that you are supporting a facility dedicated to providing excellent care for animals, a great experience for you, and a better future for all living things. For more information, visit caza.ca.
Posted by Jim Fox at 1:32 PM