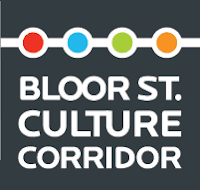 TORONTO, October 6, 2016 - The Bloor St. Culture Corridor is thrilled to announce that the City of Toronto has designated Bloor St. West, between Bathurst and Bay streets, a City of Toronto cultural corridor.
City Councillor Joe Cressy said, "Culture is at the very heart of this corridor. Within the neighbourhood, arts and culture have always been there, and the Bloor St. Culture Corridor has put a stamp on it. This is tremendous for the city, it's tremendous for the organizations who have long given life and vibrancy to the corridor, and for our residents as well. This is an arts district for the whole City of Toronto."
Councillor Michael Thompson, Chair of the City of Toronto Economic Development and Culture Committee, said, "Recognition of this area as a cultural corridor will enhance the neighbourhood's 'brand' and have a significant impact on its economic, as well as cultural, development. As the corridor evolves and flourishes, its success will strengthen the arts and culture sector across the entire city."