Stratford, ON (November 6, 2017) – String Bone Presents! Canadian, award-winning, R&B-soul songstress Jully Black in an intimate and unplugged concert on November 17, 2017 in the warm confines of Stratford’s Revival House. The concert starts at 8:00 pm.

Multi-dimensional Jully Black is a longstanding name in Canada's R&B scene with her unique musical style known as “new Motown” which comprises both retro and modern beats. Described by critics as “dazzling tinges of grooving soul and a heavy layer of pure, crisp R&B,” Jully Black’s sound and talent never ceases to amaze critics and fans alike who keep coming back for more.

You know a song's a hit when you hear it almost anywhere – on the radio, in the mall, and you subconsciously hum it – and Jully Black has a long list of such memorable tunes, including: 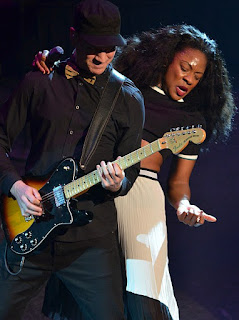 Concert-goers will probably readily recognize Jully Black’s songs before they grasp her name.

Singer/songwriter Jully Black has received numerous Juno and Gemini Award wins and nominations, as well as countless gold and platinum record sales for her soul and R&B songs. She has collaborated with major artists, including Kanye West and Celine Dion, and has even performed for Her Majesty Queen Elizabeth II, the Queen of Canada.

Dubbed “Canada’s Queen of R&B Soul” by her fans and peers, Jully Black’s powerhouse vocals, hilarious personality, genuine love of people and her truly infectious spirit will connect, inspire and move you, while filling your soul.

In addition to her long and successful career in the Canadian entertainment industry, Jully Black has performed in television shows, movies and musicals, and can also be seen as a correspondent on the entertainment news program eTalk. In 2011, she stepped on to the global stage, becoming an Ambassador of Change for the international relief and development organization CARE Canada.

Tickets for the Live at Revival House concert series are available at www.stringbonepresents.com. The website also contains information about dinner reservations at Revival House and accommodation at Foster’s Inn. Dinner is optional, but encouraged and must be reserved separately through the venue.