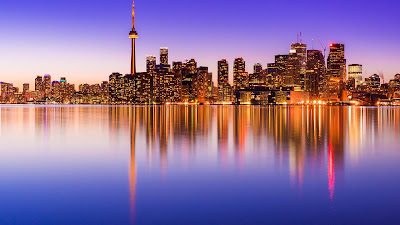 TORONTO -- Some of this year’s best films have numerous Toronto connections.  Guillermo del Toro's The Shape of Water was filmed in the city and took home top honours at the Golden Globes and Oscars. The film’s producer, J Miles Dale is a Toronto-based producer who shares the Best Picture nomination with del Toro.

Toronto is also home to visual FX studio Mr. X, that has credits on an impressive list of awards favourites including Mother!, Girls Trip, Mudbound, and Molly’s Game.

Other Toronto connections include Toronto native Christopher Plummer (nominated for best supporting actor in All the Money in the World) and Oscar nominated Animated Short The Breadwinner (Toronto actor Saara Chaudry voiced the lead character and Andrew Rosen, whose production company Aircraft Pictures is based in Toronto were the co-producers).
If you enjoy the movies, celebrity and entertainment news – here are some unique Toronto experiences just for you:

Discover:
Tour of TIFF Bell Lightbox
T: 416-599-8433 x 2686  dponce@tiff.net
350 King St West https://www.tiff.net
TIFF is dedicated to presenting the best of international and Canadian cinema to film lovers. What began as the Festival of Festivals over 40 years ago, has become the world’s most important publicly attended film festival and grown to embrace programming 365 days a year. As a premier cultural institution TIFF offers screenings, lectures, discussions, festivals, workshops, industry support and the chance to meet filmmakers from Canada and around the world. TIFF Bell Lightbox occupies an entire city block in the heart of Toronto's media and entertainment district. All spaces, including the cinemas, are wheelchair accessible to the public. Saturday's at 1pm, explore the architecture, history and functionality of our state-of-the-art building with a free guided tour.

Guided Tour of Casa Loma
1 Austin Terrace http://casaloma.ca/
Experience the elegance and splendor of the Edwardian era at Casa Loma, the only full sized castle in North America and Toronto’s premier historic attraction brought to you by the Liberty Entertainment Group. Completed in 1914, it took 300 men nearly three years to complete the almost 200,000 square foot castle at a cost of $3,500,000 (at the time).  Situated on 5 acres, Casa Loma was once the largest private residence in Canada.  Explore secret passageways, elaborately decorated rooms with authentic period furnishings or take in the breathtaking view of Toronto from one of the towers.  Casa Loma is a popular film location. Some films include: Chicago, X-men, The Tuxedo, Scott Pilgrim vs. the World, Warehouse 13, Descendants, Twitches Too, and The Pacifier.

Guided Tour of Film Locations with Bruce Bell
http://www.brucebelltours.ca/
Toronto is often referred to as “Hollywood North” because of all the filming that takes place in the city for films and television. Discover some of the city sights in the downtown core that have been featured on the big screen. Toronto doubles for New York, Boston, Washington, Chicago as well as international cities such as Paris and London. Some of the most recognized spots include the Elgin Theatre seen in the Shape of Water and Chicago, the Financial Centre in Suits starring Meghan Markle and many other downtown locations used by films such as Suicide Squad.
About Bruce Bell: Bruce Bell is a recognized historian and Toronto personality. He has been named as a recognized historian for numerous Toronto iconic landmarks including: Honourary Historian of the famed Fairmont Royal York Hotel, Curator in Residence for the spectacular Dominion Bank Building, the official tour guide of Toronto’s famed St Lawrence Market.

Discover the Ryerson Image Centre
33 Gould Street
http://ryersonimagecentre.ca/the-ric/
The Ryerson Image Centre (RIC) exists for the research, teaching and exhibition of photography and related media. As an active partner within the academic fabric of Ryerson University, the cultural network of Toronto, and the national and international photography community, we develop programs that speak to and welcome interested parties from many walks of life, including students, faculty, artists, historians, and curators, as well as the general public.

The Second City Improv Class
Second City Training Centre, 99 Blue Jays Way, 3rd Floor
https://www.secondcity.com/toronto/
Check out what a class is like, or refresh your skills with a private improve class! Play improv games like Whose Line Is It Anyway, and then head down to our Mainstage to see the pros in action! ​Since opening its doors 1959, The Second City has grown to become the world’s premier comedy club, theater and school of improvisation, entertaining 1 million theatergoers a year around the globe. Alumni of The Second City, Toronto include Mike Myers, Martin Short, John Candy, Eugene Levy and Catherine O’Hara to name a few.

Restaurants:
Sassafraz
100 Cumberland St http://www.sassafraz.ca/restaurant.aspx
Set in an array of Victorian rowhouses, Sassafraz has evolved through the decades to become a magical space in the heart of historic Yorkville. Located at the corner of Bellair and Cumberland, the little yellow house has “seen it all” from the early hippie movement of the 60’s to the lack of movement that comes from too much Bordeaux. Sassafraz offers an exceptional menu serving market-driven, French-inspired Canadian cuisine. During the Toronto International Film Festival (TIFF) this yellow house has seen a myriad of celebrities walk through its doors.
Montecito
299 Adelaide Street West http://www.montecitorestaurant.ca/
Montecito Restaurant is a modern restaurant collaboration between Hollywood director Ivan Reitman and Toronto-based Innov8 Hospitality. The vision for Montecito has been from the beginning to create an environment that captivates a wide audience and brings them together in an exceptional space.  Ivan Reitman has been the creative force behind films beloved by audiences around the world – from raucous comedies like “Animal House,” “Stripes,” and “Ghostbusters,” to more sophisticated delights like “Dave,” “Six Days Seven Nights,” and “Twins.” The career that has brought about so many laughs began in Canada...
Sotto Sotto
120 Avenue Road http://www.sottosotto.ca/
Sotto Sotto brings the romance of Italy to the heart of Toronto. Guests are captivated by its enchanting atmosphere, coupled with authentic Italian cuisine and a wide variety of wines. Perfect for a romantic evening by candlelight. Sotto Sotto presents an ideal escape from the ordinary with its inviting décor and delicious Mediterranean dishes. It's no wonder Sotto Sotto attracts so many celebrities. A-listers like Ewan McGregor, Johnny Depp and Natalie Portman have all been spotted indulging in some primo pasta here.

Cluny in the Distillery District
35 Tank House Lane http://clunybistro.com/
Cluny is not your parent’s French Bistro! Nestled in The Distillery District, Cluny Bistro & Boulangerie is unique in both its design and menu. When entering Cluny Bistro, guests are transported to a sprawling neo-Parisian bistro that fearlessly mixes eras, patterns, and materials into a surprisingly cohesive aesthetic. The Distillery District is a national historic site that includes 44 heritage buildings and numerous brick-lined courtyards. Now a popular tourist destination, the city's historic distillery district, built in the mid-1800s, makes a perfect Victorian street backdrop. Many of the old whiskey factory's appearances on screen came during the 1990s, when the area was abandoned, and into the early 2000s. Thousands of films such as David Cronenberg's The Fly, Undercover Brother, Death to Smoochie, Three Men and a Baby, Blues Brothers 2000, Chicago, The Long Kiss Goodnight. In Cinderella Man, the area was the New Jersey docks, and in X-Men, it played a concentration camp.